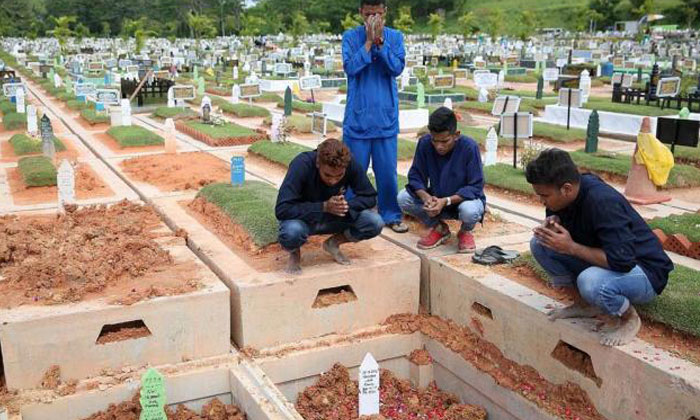 As families on both sides of the Causeway mourn the loss of their loved ones in the Christmas Eve bus crash near Muar that killed 14 people, the commission-based pay structure and low basic pay of bus drivers in Malaysia have emerged as possible contributing factors to the disaster.

The bus, operated by Malaysian company Goldstar Express, was travelling from Johor Baru to Kuala Lumpur in the early hours of the morning when it suddenly veered off the North-South Expressway and plunged several metres down a slope at high speed.

Among the dead were three Singaporean women, who were buried on Sunday at Choa Chu Kang Muslim Cemetery.

Malaysian passenger Cyril Joseph, 33, who suffered fractures and neck and head injuries, told Chinese evening daily Lianhe Wanbao that the bus was supposed to depart at 1am but arrived only at 1.45am.

He took the seat right behind driver Zakeer Zubir. He added that Mr Zakeer might have been speeding to make up time - he did not stop even in Yong Peng, a popular rest point.

The speed was making the bus vibrate so hard that Mr Joseph did not dare to sleep. The last thing he remembered was the bus "flying up".

Malaysia's Land Public Transport Commission (SPAD) has suspended the licence of Goldstar Express while multi-agency investigations are conducted, it said on the day of the accident.

Malaysian daily The Star reported yesterday that as drivers' basic pay is low and more trips mean more commission, drivers try to get more trips under their belts.

Mr Zakeer had reportedly driven nine hours from Penang to Johor Baru and had had only three hours' rest before setting off again, reported The New Paper.

He had asked his wife to accompany him, with his nine-month-old baby. His wife survived but Mr Zakeer and his daughter died.

Lianhe Wanbao reported that the company was served with 43 speeding tickets in the last three years, including 13 so far this year.

Mr Zakeer, who had been with the company for a month, did not have a record of speeding.

SPAD chairman Syed Hamid Albar told The Star that the situation could be improved with measures such as more drivers and higher fares to encourage bus operators to increase the pay of drivers.

Meanwhile, it has emerged that five Singaporeans were injured, not six as previously reported.

Related Stories
Christmas Eve crash kills 14 after bus plunges off cliff in Muar, six Singaporeans injured
Biker killed after being run over when trying to ride between 2 trailers at Jurong Town Hall Road
Johor bus crash: 3 among the dead were to get married next year
accident
fatal
bus driver
death