Elderly couple chilling at HDB lift lobby for 10 hours daily not homeless, explain why they do it 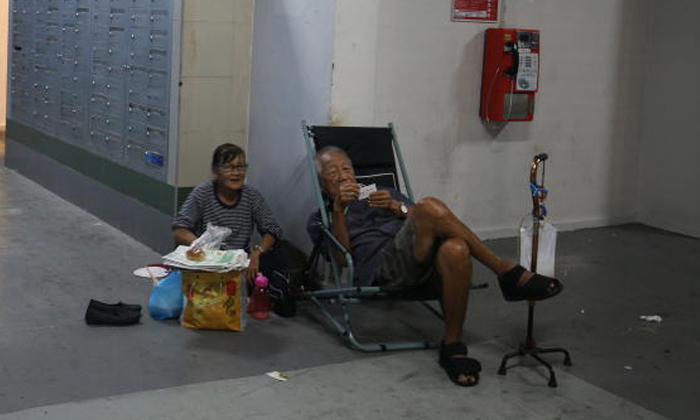 Initially thought to be homeless, an elderly couple spotted at the lift lobby of an HDB block in New Bridge Road for over 10 hours daily have shared more about their lives.

A resident, identified as Mdm Chen, told Lianhe Wanbao about seeing the couple at Block 9 New Bridge Road almost every day and suspected that they were homeless.

"I see them sitting there from day till night. They seemed to be sleeping on the streets," she said, adding that the couple might obstruct residents by sitting near the lift.

When Wanbao reporters visited the scene, they saw the couple sitting near the letterboxes outside the lift, surrounded by packets of food. The husband was on a reclining chair while the wife was seated on a carpet.

During an interview, 78-year-old Mdm Wang Yachun revealed that she has been married to her 88-year-old husband for more than 50 years.

According to her, they have no children and live in the opposite block.

Mdm Wang explained that were bored of staying at home and did not want to spend the whole day facing the television. Furthermore, it was stuffy in their flat.

As such, the couple started going downstairs four years ago to chill.

"We realised that a small corner next to the letterboxes was extra cooling. A lot of people passing by would also chat with us. It felt nice, so this became our 'base'," added Mdm Wang.

She also shared how they had originally opened a stall to sell Thai food.

However, her husband was diagnosed with diabetes, kidney disease and high blood pressure three years ago, leaving him with mobility issues that kept him home.

She therefore ran the stall on her own for a living.

"In the beginning, I only brought my husband downstairs to chill after closing the stall. It was only until March this year when the stall ceased operations then did we go downstairs from 10am to 9pm," she clarified.

Mdm Wang also said that the two of them did not occupy too much space in their corner and would always pack up all their belongings before leaving. Neither would they cause an obstruction or dirty the place.

She added: "There was once when police on patrol thought that we were homeless. After knowing that we were only there to chill, they advised us to go home early and then left."