SMU molestation trial: Accused says victim was coy and didn't really mean 'stop' when she told him to 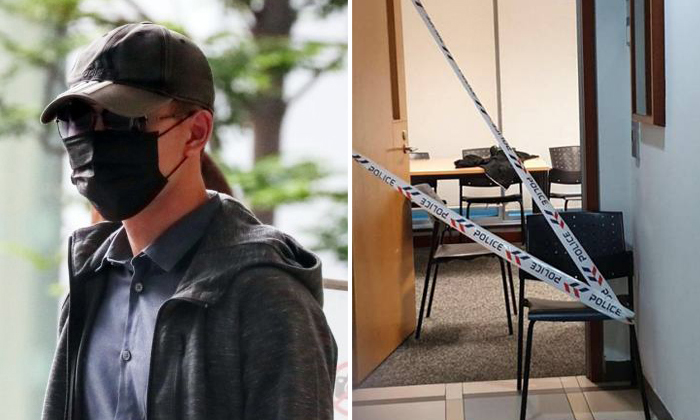 The Singapore Management University (SMU) student accused of molesting a woman during an overnight study session on campus testified that he did not think she meant it when she said "stop".

Appearing before a district court on Monday (April 5) with his parents and younger brother in the public gallery, Lee Yan Ru, 24, gave his account of what happened in the early hours of Jan 8, 2019, and testified that he did not intend to outrage the woman's modesty.

He has been accused of using criminal force on the victim, 22, by rubbing his exposed private parts against her chest, intending to outrage her modesty in a study room at SMU.

Lee, who was being examined by his lawyer Josephine Chee from Rajah & Tann, said: "When she said 'stop', to me, it was in a very jest(ful) manner... I believe she wanted me to carry on because throughout the night, she was getting more comfortable with me, there was this coy behaviour from her."

The woman, who is studying at another university, cannot be named due to a gag order.

Lee, who is working at a digital marketing start-up, said that he also did not think she had meant stop since her legs were free as he positioned himself over her. So if she really meant stop or did not want him to proceed, she could have pushed him away or shouted for help, he said.

"But she did not, she let me carry on with what I was doing," said Lee, who is still a student at SMU.

Leading up to the incident, which occurred at around 6.30am on Jan 8, 2019, Lee told the court that he rested his feet on the woman's thighs, tickled her, tried to kiss her repeatedly, touched her breasts over her bra and even exposed himself to her during their overnight study session, but repeatedly said he thought she was fine with his advances.

Lee said: "I thought as the night progress(ed), (the woman) and I were becoming more comfortable with each other and she was completely fine with my advances.

"To me, and I believe her as well, we were getting more intimate."

In one incident, he tried to unhook her bra but she stood up and did not react in any other way so he stopped, he said.

In another incident, he stood facing her while she sat on the table and kissed her cheek to which she responded "ew", which he took as being in jest because of her tone.

He then pulled down his shorts and exposed his genitals to her, making contact with her thigh.

Lee said the pair took a nap, adding that he was glad to see that she had not left after he woke up.

He touched her left breast with both his hands to wake her up, he said.

He then rubbed his exposed private parts against her chest.

The woman said “stop”, but Lee said “a while more”, and the woman did not respond.

“So I carried on rubbing my exposed private parts across her chest,” he said, adding that the entire incident took place in under 10 seconds.

The woman later got up from the floor and packed her things.

He said she then turned to him and told him to wait for her lawyer's letter and said: "Imagine how disappointed your parents will be when they receive it... Your future is gone."

Lee said he was shocked to hear this because he believed the acts were consensual.

He followed her as she left the study room and kept apologising because he did not want to "get into trouble".

The woman made a police report that morning.

The trial continues on Tuesday with the prosecution cross-examining Lee.

If convicted of molesting the woman, Lee can be jailed for up to two years, fined, caned, or given any combination of these penalties.

Related Stories
SMU molestation trial: Alleged victim said she had stress disorder, has broken up with BF
SMU student allegedly molested and stimulated himself on sleeping woman after they watched Netflix under a table
More About:
SMU
molest
court