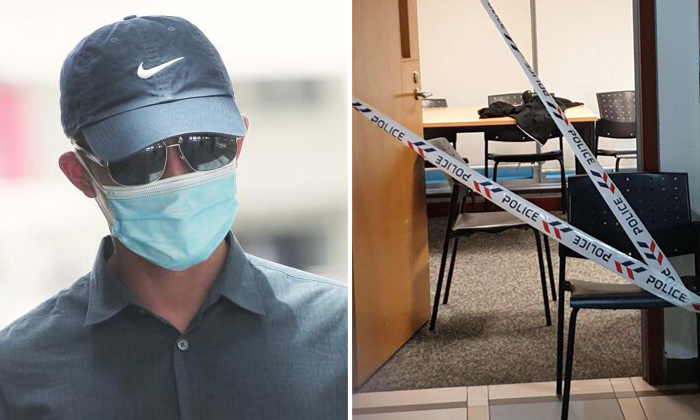 A woman who accused a Singapore Management University (SMU) student of molesting her on campus said she had pushed him away and dodged his attempts to kiss her earlier.

When he allegedly groped her, she pried his fingers off. But she did not leave because there was no transport that early in the morning and she did not want to make things awkward between them, as they had mutual friends.

In the early hours of Jan 8 last year, he is said to have stimulated himself while he was on top of the woman, who was asleep.

The woman, who was 21 then, took the stand after lunch on Monday (Sept 7), on the first day of Lee's trial.

She testified that she got to know him around December 2018 when he messaged her on Instagram.

"I was very casual because we have mutual friends. He contacted me first," she told District Judge Sharmila Sripathy.

The woman, who studies in another university, cannot be named due to a gag order.

She then described what happened that night, saying her boyfriend did not know that she was meeting Lee.

They had met up at SMU's School of Economics and Social Sciences at around 1am on Jan 8 last year to study.

In a study room, Lee was sitting near her at a table when he placed one of his feet on her left thigh, the court heard.

"It was weird and awkward... I grabbed his foot and moved it away so that it fell to the floor," she said.

But Lee repeated the same act a few more times, she added.

She then took her laptop and rested on the floor to watch a movie on Netflix, and Lee joined her.

The woman told Judge Sharmila that Lee later said that the lights were "really bright" and suggested that they go under a table.

At around 2am, while they were under the table, Lee "tickled" her armpit and she used her hand to block him.

The woman said Lee then groped her body after the movie ended at around 4am and she had to pry his fingers off.

When Deputy Public Prosecutor Andre Chong asked her why she did not leave, she replied: "It was the middle of the night. There was no mode of transportation.

"I did not want to leave a bad impression or make him feel bad. I didn't want to make things hostile.

"If it's someone I didn't know, I would have got up and just left... I just didn't have it in me to just walk off."

To "break the tension", she suggested going for a smoke break at around 4.45am.

While walking out of the building, the court heard she gave him a "playful kick", as "the situation was tense" and she tried to make it more "casual".

But during the smoke break, she said Lee placed his arm around her waist. She did not say anything, as she did not want to "embarrass him".

They returned to the school later and she said that Lee then followed her into a female toilet, adding that she entered a cubicle while he remained outside.

The court heard that they then returned to the study room. While sitting on a table, Lee tried to push her down.

She testified that he tried to kiss her three times but she dodged him each time.

She later suggested that they go for another smoke break and he agreed to take her downstairs at around 5.25am.

In proceedings earlier in the day, the court heard that the woman was allegedly molested when she fell asleep.

After Lee got off her, she left the room and alerted security guard Woo San Nin, who was on duty at SMU. She also called the police at 6.37am.

Mr Woo, who also took the stand on Monday, said he saw a male student kneeling down as though he was asking for forgiveness from the woman.

The trial resumes on Tuesday.

If convicted of molestation, an offender can be jailed for up to two years and fined or caned.