Singapore's Running Man shows off his hot bod at Simei 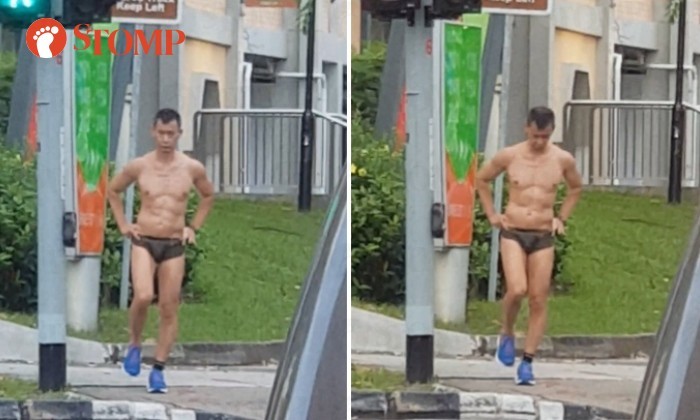 "If you've got it, flaunt it," seems to be a common saying -- and an advice a runner took a little too literally.

Stomper Lim was shocked when he spotted this runner showing off his well-groomed body during his morning jog on Saturday (Nov 21) at 7.40am.

Lim was at the junction of Simei Road and Simei Street when he saw the half-naked man doing leg stretches as he waited for traffic lights to turn green.

"Do you think it is socially acceptable for an adult to run around a public place in just their underwear?" Lim said.

"There are schools and kindergartens nearby, so young and vulnerable children might be alarmed when they see this.

"I've also heard that there was another half-naked man who likes to run along the expressways.

"I hope these people are not running around like this for popularity and to gain attention on social media."

This is indeed not the first time joggers have stripped down to their underwear during their runs.

A half-naked man was spotted jogging along the Ayer Rajah Expressway (AYE) -- and has been seen doing so for three years.

This same man apparently said that he is a "champion runner" when passers-by warned him of the dangers of running on the road.

Related Stories
Half-naked man still jogging along AYE even after 3 years
Half-naked man jogging on AYE is also a common sight in the west, says Stomper
Half-naked man risks life and limb by running along AYE
Man jogs on AYE, says he's a "champion runner" after passers-by tell him it's dangerous
More About:
running
jogger
Simei