Half-naked man jogging on AYE is also a common sight in the west, says Stomper 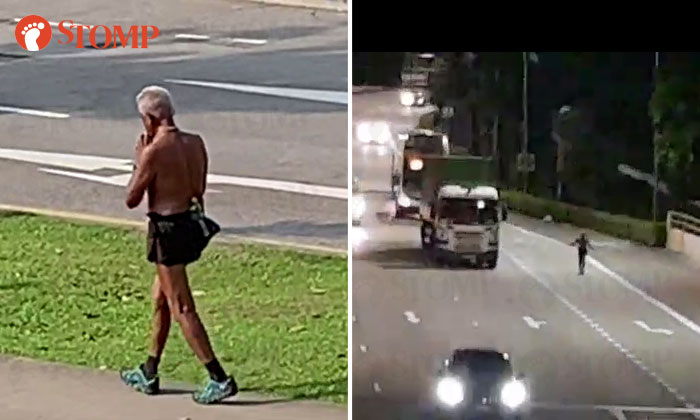 A man who was spotted jogging half-naked along the Ayer Rajah Expressway (AYE) on Tuesday evening (Apr 14) is apparently a common sight in the western part of Singapore.

After reading Stomp's report, Stomper TL shared a video he took at 9.30am on Mar 30 of the same man.

"Besides the AYE, he is also often spotted in other western parts of Singapore such as around Jurong East, Clementi and West Coast," said TL.

"He enjoys shouting at the top of his voice like a Regimental Sergeant Major (RSM) while jogging at random times of the day, including as early as the wee hours of the morning, which can wake the whole neighbourhood up.

"It is puzzling why he has not yet been arrested for continuing to cause a public nuisance after so long."

Stomp earlier reported on the same man jogging on the AYE between Portsdown Road and Alexandra Road in August, 2018.

He was heard shouting that he was a 'champion runner' and that the 'Land Transport Authority (LTA) cannot catch him' when he was warned that he was not supposed to run on the expressway.

Related Stories
Half-naked man risks life and limb by running along AYE
Hey girl, no bus is worth risking your life to catch!
'King of the road' points middle finger at driver while jaywalking in Outram
More About:
jogger