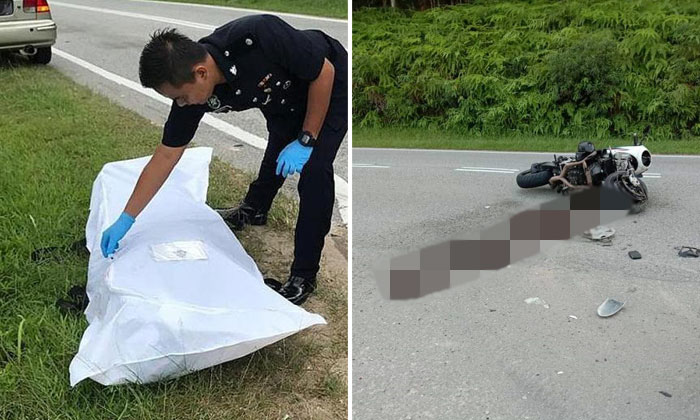 A 42-year-old Singaporean motorcyclist was decapitated in a freak accident in Johor Bahru on Sunday (June 16) at about 9am.

The biker, who has been identified as Mr Xavier Liaw Xiang E, was riding his BMW high-powered motorcycle from Gelang Patah to Jalan Ulu Choh when he hit a Toyota Hiace van that was turning right from the opposite direction.

The impact threw Mr Liaw's body to the middle of the two-lane road.

Several Stompers alerted Stomp to photos and videos circulating on WhatsApp of the decapitated body at the accident scene.

Due to their graphic nature, Stomp will not be publishing them.

The 28-year-old Malaysian van driver escaped unhurt from the accident and has been arrested.

Assistant Commissioner Dzulkhairi said: "The cause of the accident was due to the motorcycle slamming into the left side of the van’s rear. The victim died on the spot."

The victim's sister, Ms Liaw Wy-cin, 44, told The Straits Times: "We are shocked and saddened by the sudden tragedy, especially on Father's Day.

"We had just met for Father's Day dinner last night, and my mother spoke to him around midnight.

"This is my father's biggest fear come true. My mother had always nagged him about the danger, but he always said that at least he would go doing what he enjoyed, and we take some comfort in that."