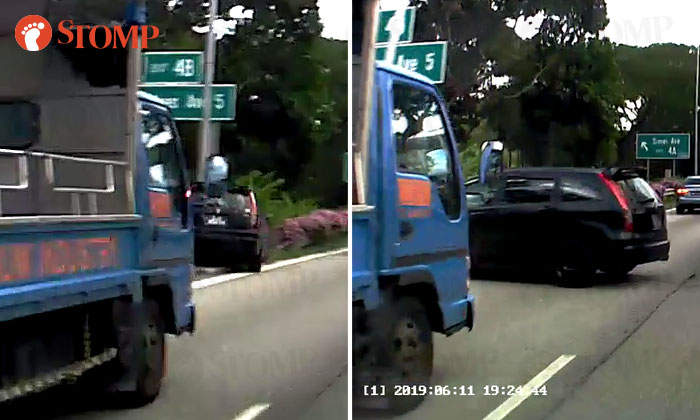 A 37-year-old woman and 35-year-old man were taken to hospital after an accident involving a car and a lorry occurred on the Pan Island Expressway (PIE) on Tuesday (June 11).

Stomper Bernard alerted Stomp to the incident and shared a video taken from his in-car camera of a black car crashing into a lamp post before coming to a stop in front of an oncoming lorry.

"I was driving along the PIE when suddenly, I heard a loud bang and the boot of a car appeared mysteriously on my left," said the Stomper.

"I was quite shocked so I pulled my car slightly to the right."

In response to a Stomp media query, the police said they were alerted to the accident along the PIE towards Changi Airport, before Tampines Avenue 5 exit at about 6.59pm.

"The 37-year-old female car driver and a 35-year-old male lorry passenger were conscious when conveyed to Changi General Hospital," a police spokesman said.