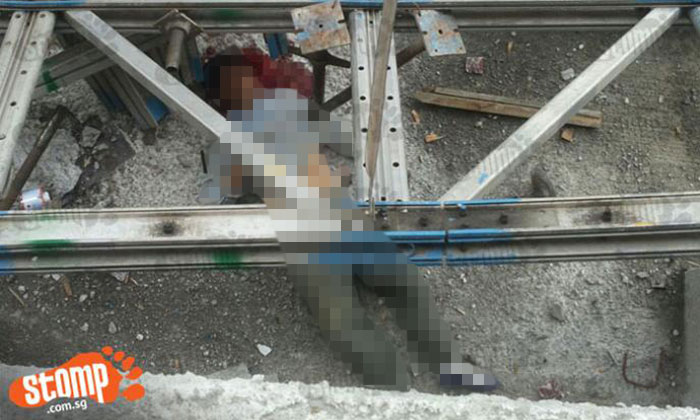 The Police have issued a statement saying that they are investigating the unnatural death of the 47-year-old worker.

"On 9 December at 9.46am, Police were alerted to a case of unnatural death at the junction of Sembawang Road and Canberra Road.

"The 47-year-old was male worker was pronounced dead by paramedics at the scene.

A Stomper sent Stomp photos showing a worker who died this morning (Dec 9) at a construction site located at the junction of Sembawang Road and Canberra Road.

In a photo the Stomper sent, the worker can be seen lying under metal bars. There was blood coming out of his mouth.

In another photo, paramedics can be seen pushing a stretcher into the construction site.

Said an SCDF spokesperson with regard to the incident:

"We were alerted at around 9.48am and we dispatched on ambulance.

"A male Chinese in his 40s was pronounced dead at the scene."