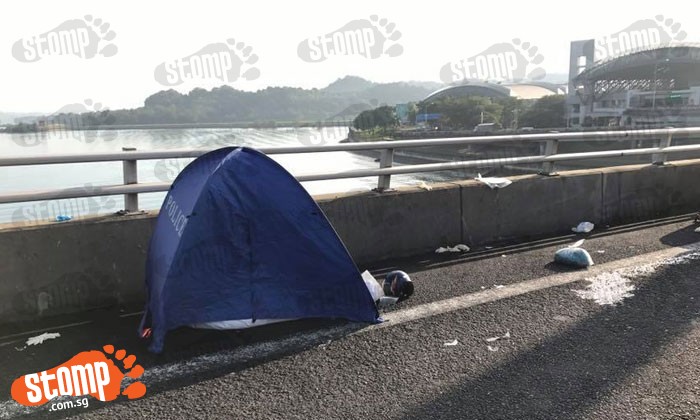 Stomper Anonymous saw the aftermath of an accident involving two motorcycles that left one dead and two seriously injured near Tuas Checkpoint at around 5.30am today (Dec 6).

He posted photos showing a death tent at the scene on Facebook.

"For the first bike, the rider was already covered with white plastic while for the other bike, two were badly injured."

In addition, Mugal noticed that the incident occurred at a pothole that has been there for quite a while and there were surprisingly many blue factory buses today.

According to The Straits Times, the Immigration and Checkpoints Authority (ICA) had said in a press release that the accident took place during the morning peak period, traffic was building up and motorists can expect delays.

The Singapore Civil Defence Force (SCDF) said they were alerted to a call for ambulance assistance at about 5.09am, and dispatched an ambulance.

A man in his 50s was pronounced dead at the scene by paramedics.

A male and female in their 30s were taken to Ng Teng Fong General Hospital.