What's the hold up? Motorcycles cause massive jam at Tuas Checkpoint 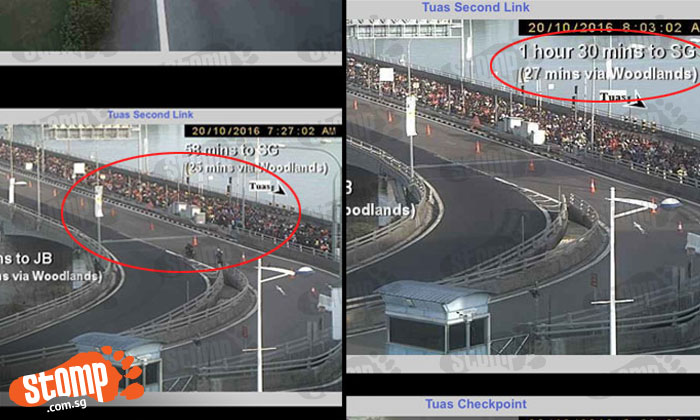 Stomper Wei Chong was stuck in a massive jam at the Tuas Checkpoint at around 6.30am this morning (Oct 20), while on his way from Johor to Singapore.

Curious to know why the traffic was not moving, he did a quick search on his phone to check on the status of the jam.

If you look at the pictures closely, you'll notice that the entire bridge was packed with only motorcycles. They had taken over all the lanes that belonged to the other vehicles: car, bus and lorry; not giving them a chance to pass through.

According to the Stomper, there were usually three to four enforcement officers on duty, but there were none this morning.

"Where are they this morning?

"This has caused many poorly disciplined motorcyclists to get their way by using the lanes of other vehicles.

"This is a very dangerous act and is not safe for drivers.

"Thousands of Malaysian workers and Singaporean who live in Johor will be late to work for a few hours due to this. This'll definitely impact Singapore's economy.

Wei Chong hopes for the ICA to look into this serious issue as it can be easily resolved -- make sure the enforcement officers are present.