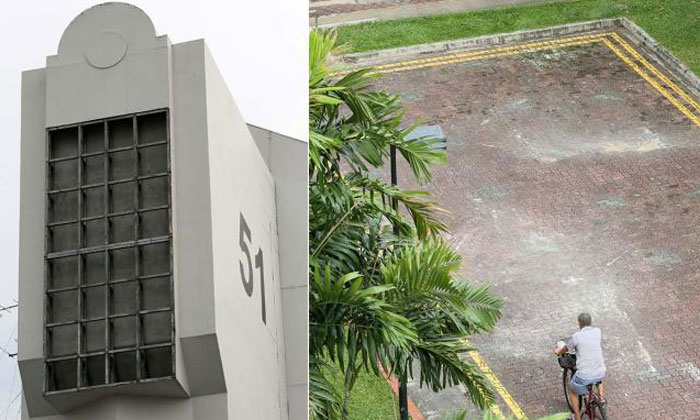 A wall segment from a Housing Board block in MacPherson fell 11 storeys with a loud crash in the early hours of Wednesday.

The incident occurred at about 6am at Block 51, Circuit Road, Shin Min Daily News reported yesterday.

No one was hurt by the slab, which the newspaper understands measured roughly 4m long and 2m wide.

When Shin Min visited the site, the fallen segment had been cleared away.

Resident Lin Yafu, a 78-year-old hawker, told Shin Min that it had been raining, with strong winds, when he heard a loud crash.

He said: "I looked out of the window and saw a huge hole in the wall of the roof opposite.

"A piece of the facade had fallen onto the middle of the road."

An HDB spokesman said the Marine Parade Town Council was notified of the matter on Wednesday.

The spokesman added that the piece of the facade that had fallen was a "Calcium Silicate Cladding Board" and was "non-structural".

The town council will begin the repair works and, along with the HDB, investigate nearby blocks that are similarly designed.

The Building & Construction Authority has dispatched engineers to the scene for investigation.

Residents with any queries are advised to call the town council directly.

MacPherson SMC MP Tin Pei Ling told Shin Min it was fortunate that nobody was hurt.

She added that the structural integrity of the HDB block was not compromised.

It is understood that the area undergoes repair and redecoration works every seven years.

The fallen facade had been put up about 20 years ago, during a lift renewal exercise.

Ms Tin said: "I hope the authorities consider revamping these few blocks in the near future."