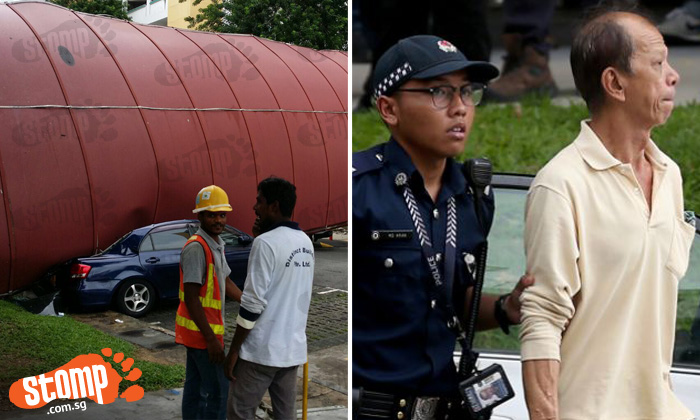 A driver in his 60s was arrested after he crashed a lorry crane into the roof of a sheltered walkway that linked Blocks 116 and 118 at Bukit Batok Avenue West Avenue 6 on June 17.

Stompers Anonymous, Chris, Alan, Jason, Din, Andy and Westcoaster saw it topple the sheltered walkway and crash onto a parked car at about 9.30am.

According to The New Paper, the lorry-crane driver from Tai Hoe Building Products had forgotten to lower the crane and its crank hit the linkway roof, said a notice from Jurong-Clementi Town Council to residents.

The paper spoke to Madam Zhen Ya Lan, who saw the accident and described it as "terrifying".

The 80-year-old retiree told The New Paper: "I heard a very loud 'boom' when the entire walkway fell.

"I got a huge shock, I didn't expect the entire overhead shelter to fall."

Her chat with three friends at the void deck was interrupted by the accident, which happened at about 9.30am at the carpark between Blocks 116 and 118 in Bukit Batok West Avenue 6.

The linkway roof was uprooted from its foundation and crashed, seriously damaging a dark blue sedan and denting the roof of an adjacent wheelchair walkway.

After the crash, 15 cars, four motorcycles and the lorry were trapped in the carpark.

Police said a male lorry driver in his 60s was arrested.

Madam Zhen was visibly shaken as she recounted the accident at the walkway she uses every day.

"It was scary to see such a huge structure fall, it's what I'd imagine to see when the world ends," she said.

She is thankful that there was nobody at the walkway or in the parked car.

Both the police and the Singapore Civil Defence Force confirmed that there were no reported injuries.

Many other residents living in the neighbouring blocks echoed Madam Zhen's concerns.

Ms Alicia Phoon, a 32-year-old saleswoman, said: "There are kindergartens on both sides, so luckily nobody was hurt.

"Look, the wreckage is bad. If someone had been crushed underneath, it would have been very serious."

Another resident, who wanted to be known only as Miss Sabrina, said she felt intimidated just looking at the damage.

"It is so dangerous. Had I been in that affected car, I wouldn't be here talking to you," said the full-time student in her 30s.

She is also thankful her car was not in the affected carpark.

Miss Sabrina usually parks her Toyota Altis in the lot next to the damaged car - the third lot from the walkway - but she had left home early yesterday morning to run errands.

"I'm so glad I drove out. It has always been my favourite parking spot - but not any more," she added.

At about 1.35pm, a truck-crane arrived at the scene to start clearing the fallen linkway.

Madam Zhen said the owner of the damaged car is a man in his 70s, who lives in Block 118.

Bukit Batok MP Murali Pillai, who is overseas, told Channel NewsAsia that he will meet the man when he returns to Singapore.

He also said he will personally give the car owner legal advice on pursuing a compensation claim.

A spokesman for Jurong-Clementi Town Council said: "Our immediate priority is the safety of the residents. The affected area had been barricaded while we worked on dismantling the damaged portion of the linkway."

In a media statement, the Building and Construction Authority (BCA) said: "BCA has directed the owner (of the walkway) to appoint a Professional Engineer to carry out a detailed investigation and recommend permanent rectification works."