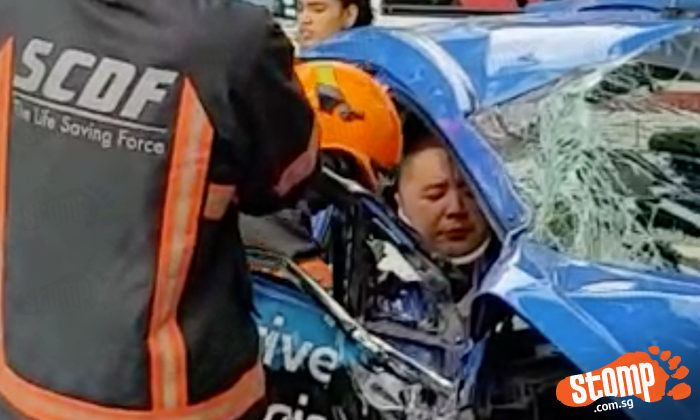 A taxi was involved in an accident along Toh Guan Road East this morning (Nov 18).

The driver of the cab was stuck in the wrecked vehicle after crashing into a lamp post along the roadside, leaving the front of the vehicle visibly dented.

Stomper Desmond was around the vicinity at 9:40am today when he witnessed a team of SCDF personnel retrieving the cabby.

Desmond took a video and send it to Stomp.

In the video, the driver is seen in a neck brace as various SCDF personnel pried open the door of the vehicle to place him on a stretcher.

Stomp has reached out to the SCDF for an official statement:

"The SCDF was alerted at 9:20am and dispatched one fire engine, one Red rhino, one ambulance and one support vehicle.

"Upon the SCDF's arrival, one Chinese man in his forties was trapped and extricated by the SCDF using hydraulic rescue tool.

"He was conveyed conscious to National University Hospital (NUH)."

This comes on the heels of another separate incident, where a cab crashed into an eatery in Braddell recently.

The taxi driver was also conveyed to a hospital.

Catch the video below.