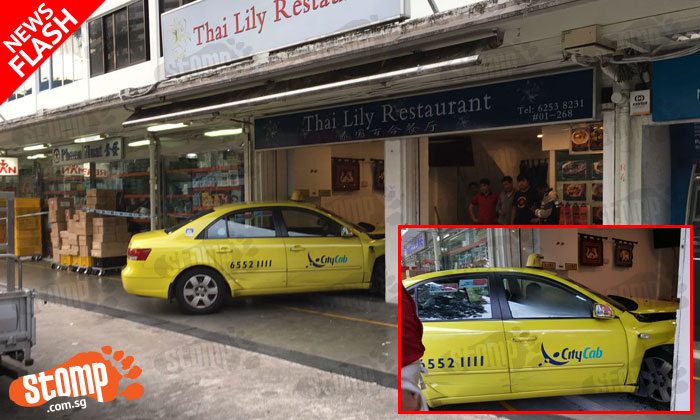 Stomper Ng was on her way to work when she witnessed a taxi crashing into a Thai restaurant a few steps right in front of her, at around 5.20pm today (Nov 16).

The name of the food store is Thai Lily restaurant and it is located at Block 107, Lorong 1 Toa Payoh.

"I was on my way to work, and the taxi crashed into the restaurant.

"If I had walked three steps ahead, I would have gotten hit by the taxi.

"What's unusual is that the taxi driver was not on the driver's seat, but on the passenger seat instead.

"Thankfully no one was eating in the restaurant at that time.

"I feel really shocked because the sound of the crash was really loud.

According to Ng, oil from the taxi spilled all over the store, and the taxi also damaged some walls of the restaurant.

The Stomp team was at the scene and spoke to another fellow stomper whose car was affected by the crash.

The Stomper was at a neighbouring store during the time of the accident, and when she heard the crash, she rushed to the scene and realised the right side of her silver car was slightly grazed by the taxi.

Stomp understands that the taxi driver has been conveyed to a hospital, however the cause of the accident is still unknown.

Related Stories
2 teenaged pedestrians sent to hospital after accident with taxi along Boon Lay Way
Could MBS accident where elderly valet was hit by taxi have been avoided with this anti-collision system?
Two sent to SGH after accident involving lorry and taxi along Keppel Road
taxi
accident
taxi crashes into restaurant
injured
cabby
reckless
restaurant