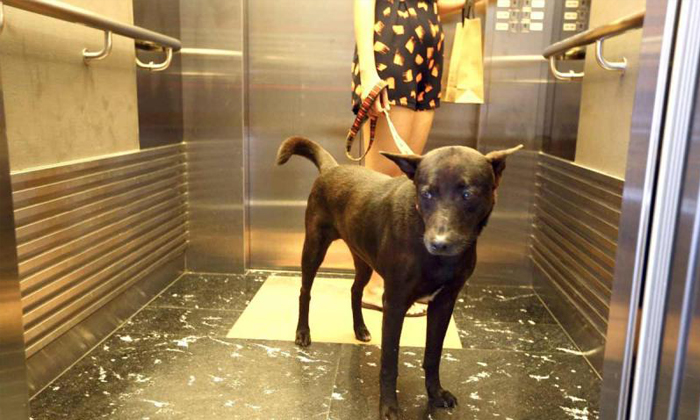 A resident at the Residences @ Killiney was sent 11 e-mails from the condominium's management council telling her to stop using the lifts with her dogs.

She has been ignoring the order.

Lawyers told The New Paper that generally these matters are enforced through by-laws and not rules.

And the Building and Construction Authority (BCA) said the condo must get at least 75 per cent approval from homeowners before a by-law can be passed.

Lawyer Oei Ai Ling, 62, owns two mongrels, Jerry and Dogg. She said they are not allowed in the lifts because they are too large to carry. She has been told to take them in the service lift instead.

There are four 10-storey twin-stack towers and four penthouses in the condo comprising 68 units.

She told TNP that the council, which has six members, held a meeting in August and discussed rules concerning pets.

She said: "They passed these two rules (among others). One, only hand-carry pets are allowed in the (regular) lifts.

"Two, the pet's owner is advised and encouraged to use an empty service lift."

The lifts in Madam Oei's condo go straight to each resident's apartment and are operated through a keycard.

Madam Oei continues to take her dogs into the lifts as she does not think the rule is fair because it was not a decision involving all the residents.

"Right now, I am ignoring them," Madam Oei said.

"If they try to enforce (their rule), I will take (legal) action."

The condo is managed by JLL Residential. It referred TNP to the condo's management council.

When approached, the council explained why it had the rule.

In an e-mail reply, a spokesman said: "Several families, particularly those with young children, had raised concerns about safety when there were big dogs using the lifts.

"We allow hand-carry pets in the lifts as they are within the control of the owners."

The council added that it is in talks with the BCA.

Mrs Philippa Ilincic, who has been living at the condo with her family since 2013, said: "I don't understand really, everybody shares the public spaces, and there has never been any trouble with the dogs."

Regarding the lifts, she added: "My reaction is if it is your own home, you should have a right to use (them)."

Another resident, Ms Jolene Chua, 34, who owns a miniature schnauzer, also disagrees with the rule.

She said: "I don't think it is a necessary rule. The other party (who is afraid of the dog) should just talk to the dog owner."

RULE DIFFICULT TO ENFORCE WITHOUT BY-LAW

Right now, Madam Oei Ai Ling is not legally obliged to keep her dogs out of the lifts, said lawyers whom The New Paper spoke to.

Lawyer Toh Kok Seng said the Residences @ Killiney's management council cannot punish Madam Oei, though it can request that she refrain from taking her dogs into the lifts.

He said it would be tricky to enforce the rule if it is not backed up by any by-laws - rules that residents have to obey.