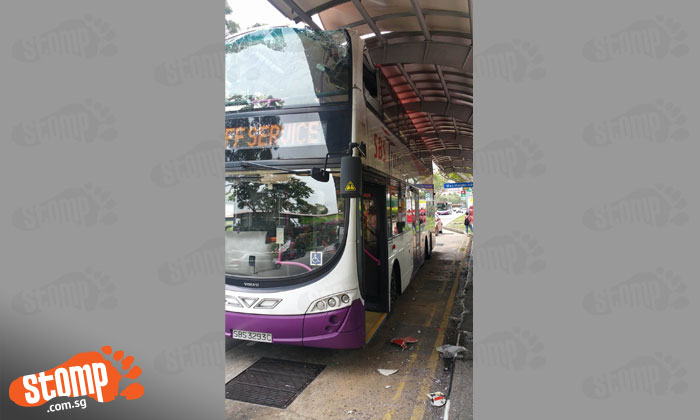 A Stomper was at Bishan MRT Station when he saw an SBS Transit bus crash into the shelter of the taxi stand there yesterday (April 2) at 10.15am.

It is unclear how this happened but the top of the bus was severely damaged and scraps from the bus were on the ground.

The Stomper said that the bus was towed away shortly after.

Ms Tammy Tan, Senior Vice President, Corporate Communications, SBS Transit informed Stomp that no one was injured in this incident.

"We apologise for the inconvenience caused. We are investigating the incident," she said in a statement.

"On April 2, 2017 at 11.21am, the police were alerted to an accident involving a bus at Bishan Road towards Braddell Road.

Related Stories
Top of bus damaged after crashing into shelter roof opposite VivoCity
Could this be the magic snack bus?
Poor bendy bus has a back strain after getting stuck at Woodlands Interchange
accident
bus accident
Bus