Could this be the magic snack bus? 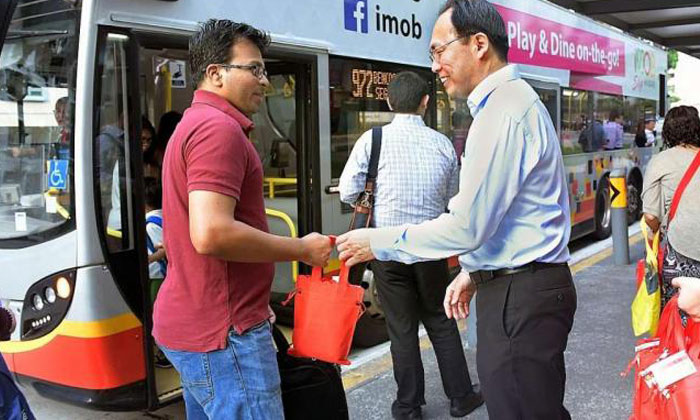 Bus stops are not known for being particularly happy places - especially as commuters wait to head off to work in the mornings.

But MP Liang Eng Hwa has been aiming to change that. Since January last year, he has regularly surprised residents waiting at bus stops with snacks such as muffins, curry puffs or muruku.

His latest effort was last Friday morning. Between 7am and 8am, he and grassroots leaders distributed more than 400 bags of pineapple tarts and mandarin oranges to commuters at Block 458 Segar Road, under an initiative called Happy Bus Stops @ Zhenghua.

Mr Liang, an MP for Holland-Bukit Timah GRC, uses the opportunity to ask about the reliability of bus services in his ward in Bukit Panjang, a growing town which has seen nine new public housing developments sprout up in the last five years.

"We like to hear first-hand about people's experience with public transportation. As the population builds up, we want to see whether public transport can cope," he said.

So, for instance, the latest feedback he has received is that loop service 972, which goes from Bukit Panjang to town and back, is usually delayed on the return leg in the mornings.

This affects students going to West Spring Secondary School from Segar Road, and he intends to bring up this issue to the Land Transport Authority (LTA).

It is made available alongside the Government's $1.1 billion Bus Service Enhancement Programme (BSEP), which started in 2012 and has injected 820 new buses onto the roads islandwide as at September.

When asked about the publicity grant, LTA said it "supports ground-up efforts that are initiated by the community to encourage the use of public transport and increase awareness of (its) BSEP at the local level".

It declined to give details of the scheme, including who is eligible and how much has been disbursed over the years.

Mr Ang has used it, together with funds from the citizens' consultative committee, to produce newsletters sent to all 15,000 households in Cheng San-Seletar.

The newsletters, now in their third edition, help to keep residents apprised of new bus routes and offer updated information, such as which bus services are wheelchair friendly, Mr Ang said.

He added: "We want to get residents to consider walking, cycling and taking public transport."

Residents said the MPs' outreach efforts are a good gesture but what is key is bus connectivity.

Zhenghua is one of those which have benefited from BSEP and other improvements.

For instance, bus service 972 was launched in November 2013 and the service was extended to Senja Road in June 2015 to benefit more residents.

Resident Julie Tang, 40, a retail manager, said: "In the past, we didn't have many bus services, and had to use the LRT. Now we have more choices."

Transport consultant Gopinath Menon said creating publicity around BSEP can help raise awareness of how much bus services have been ramped up since 2012.

"Some people may have this perception that public transport is not very good, so it's good to keep on reminding them to try it out."

Related Stories
Foreign workers in S'pore get to enjoy unsold Starbucks snacks -- thanks to this awesome woman
Why Changi Airport is the best: Staff bring out carts with drinks and snacks during luggage retrieval delay
"Regardless Christmas or Deepavali, we celebrate together": Stomper's family shares kampong spirit this festive season
Bus
MP
kind-hearted
food
unusual
snacks
cool
interesting
kindness