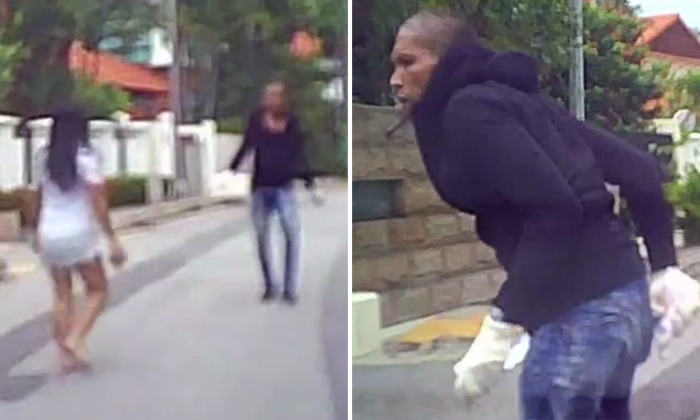 A man was caught trying to escape after allegedly breaking into landed property in the East Coast area and stealing money on Oct 27, at around 11.30am.

A video posted by Lianhe Zaobao shows two maids chasing after the man on foot and with red bricks in their hands.

During his escape, the man dropped some of the 820 British pounds (around S$1,391) that he had stolen onto the road, which he tried to pick up, only to trip and fall.

This allowed one maid to catch up with him.

However, he turned "very, very violent" and tried to hit the maids. He also threw waste paper at them while trying to flee.

Fortunately, a male passer-by, Mr Goh, stepped in and prevented the guy from escaping.

The 33-year-old finance manager had been driving by the scene while on his way to lunch with his family when he saw what happened.

One of the maids, who was barefooted, had waved for him to stop and asked for help. She told him that someone had taken money "from inside the house" and that her employer was not home.

"I went up to him, I basically stopped him, telling him that I'll not let him go, unless he lets me check that he has returned all the [bank] notes already," said Mr Goh.

"I also told him that we had called the police and that if he did not stop, we would not treat him too kindly."

Mr Goh also noticed that the thief had a pair of foldable scissors in his gloves and made him remove them before he did a quick body search.

According to Lianhe Zaobao, the thief repeatedly claimed to be very poor and pleaded with Mr Goh to let him go.

The police then arrived on the scene and the man was handed over to them.

Having your house broken into will totally ruin your day. Here are some things you can do to prevent housebreaking, as advised by the Singapore Police Force:

a) Ensure that all doors, windows and other openings are well secured with good quality grilles and close-shackled padlocks;

b) Secure all doors and windows before retiring to bed or when leaving your home unattended, even for a short while;

c) Install a burglar alarm, sensor light and/or close circuit surveillance camera to cover the access points into your premises. Ensure that they are tested periodically and in good working condition;

d) Keep large sums of cash in banks and expensive jewellery in a safe deposit box; and

e) If you are going away for a prolonged period, suspend the newspaper subscription and arrange for someone to clear your mail and check on your home.

If you notice strangers loitering or behaving suspiciously around your estate, please call the Police hotline at 1800-255 0000, or dial ‘999’ for urgent Police assistance.