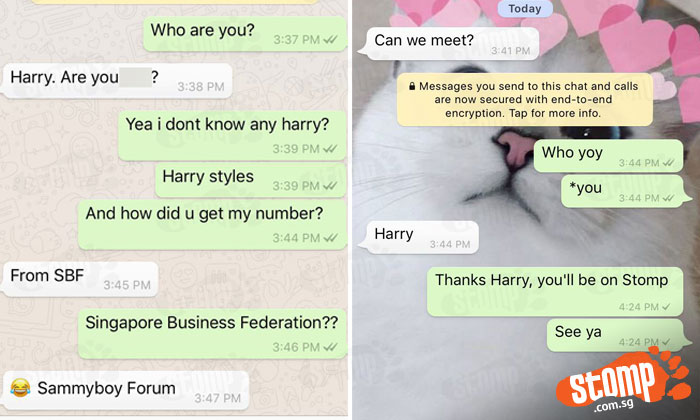 Submitted by Stomper AT

Stomper AT and a few of her schoolmates have been receiving texts on WhatsApp from a stranger asking them for meet-ups.

In a telephone interview, AT, a student at a polytechnic, said that the stranger introduced himself as 'Harry'.

Texts that 'Harry' sent to AT and five of her schoolmates typically start with him asking them if they want to meet.

In a screenshot of a conversation he had with AT's friend, he said that he had gotten his recipient's number through sex forum Sammyboy, and that she has been listed on the forum as a 'freelancer'.

In another conversation with the Stomper, 'Harry' was informed by her that she will be reporting what happened to Stomp.

AT has said that she has no idea how 'Harry' managed to get the contact details of her and her companions or how their numbers made it onto Sammyboy, if indeed their numbers are there.

They have since blocked 'Harry' on WhatsApp.