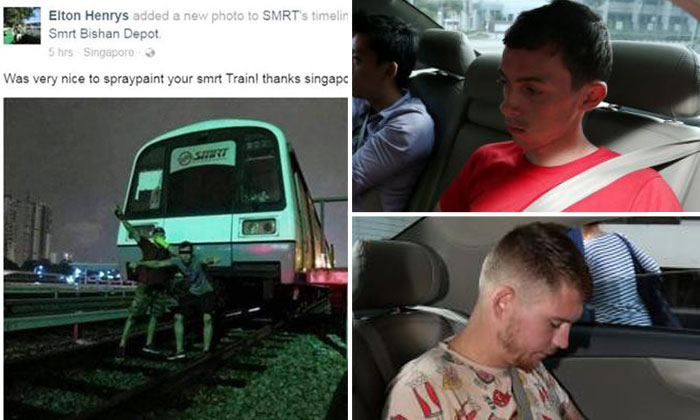 It was captioned with a taunt: "Was very nice to spraypaint your smrt Train! thanks singapore!"

The picture on SMRT's Facebook page, which depicts two men posing on the tracks in front of a train, was shared by a user going by the name "Elton Henrys". The paper reported that the picture has since been removed.

Hinz and Von Knorre, who had been working in Australia, bought 12 cans of spray paint and yellow latex gloves upon their arrival in Singapore.

During their third intrusion at the depot, they took a photo together and spray-painted a train carriage with 10m-high graffiti.

SMRT spent $13,650 on the clean-up operation for the train, which was out of commission for over a week.

Within weeks, the duo were tracked down by the Thai police, arrested by the Malaysian police, and extradited to Singapore. They were sentenced to nine months' jail and three strokes of the cane last March.

Earlier this year, footage was leaked of a previous SMRT vandalism incident in 2011, where the perpetrators were never apprehended.

Fricker received seven months' jail and three strokes of the cane, but Lloyd was never caught. SMRT was fined $50,000.