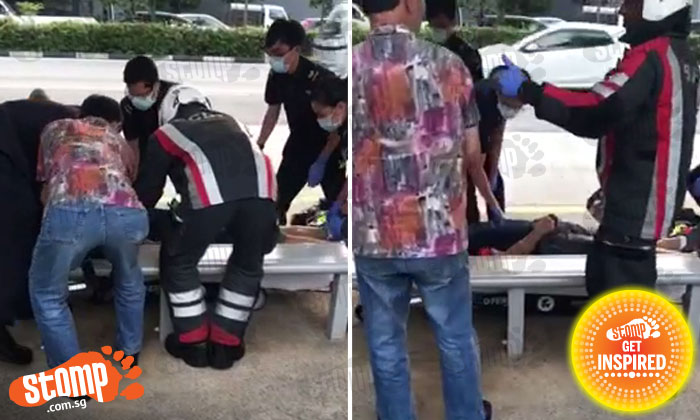 Passersby and SCDF came to the aid of a man who fainted at a bus stop outside Haw Par Villa yesterday (Mar 9) at around 6pm.

Stomper Master Lee alerted Stomp to what happened after receiving a video from a friend showing a passerby and SCDF personnel helping the man onto a stretcher.

In a telephone interview, the Stomper said that his friend was at the bus stop when he heard a loud thud.

Upon investigation, he found out that the man had fainted and hit his head against the bench at the bus stop.

Master Lee's friend then called the ambulance. Passersby later tried to prop the man up and revive him. However, he did not regain consciousness.

The video the Stomper sent shows what happened after SCDF arrived.

Four paramedics, an SCDF officer in a helmet and a passerby in a red shirt helped to lift the unconscious man from the bench at the bus stop onto a stretcher.

Towards the end of the video, the SCDF officer gave the passerby a thumbs up, possibly to acknowledge the help that he provided.

The Stomper believes the man who fainted is in his 40s. He is unclear why he fainted and what happened to him after he was taken away.