Oops! Was driver too distracted by Joseph Schooling's victory parade before crashing into Jaguar in front? 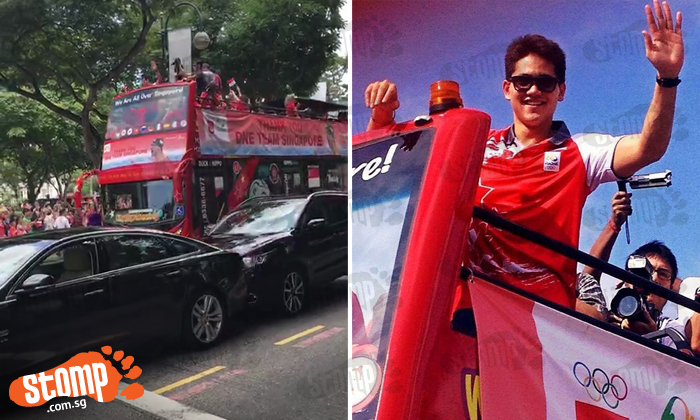 A Stomper sent Stomp a video clip of an accident which she witnessed earlier today (Aug 18) at around 12.30pm in Bras Basah.

In the video, an open-air double-decker bus with Schooling on board can first be seen travelling on the road.

A Jaguar then appeared on the left lane of the bus.

According to the Stomper on WhatsApp, the driver of the Jaguar then stopped his vehicle as the traffic lights were showing red.

A driver of a black-coloured SUV at the back of the Jaguar however did not stop his vehicle, possibly because he was busy looking at the victory parade.

He crashed his SUV into the rear of the stationary Jaguar.

Fortunately, the accident did not appear to be serious.