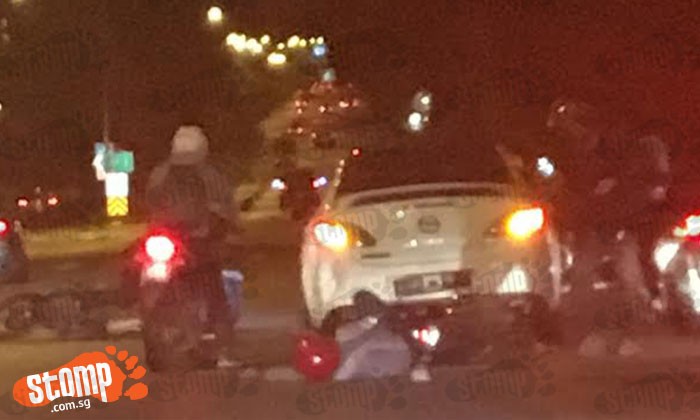 Stomper T was driving last night (Dec 28) at around 7.44pm when she saw two motorcyclists on the ground near a white Mazda along Bukit Timah Expressway towards Mandai direction.

They were just before the Bukit Panjang Road Kranji Expressway exit.

According to her, by that time the traffic has slowed down and her son who was in the car with her managed to snap a quick picture of the situation.

The Stomper said, "There were three motorcyclists on the left, right and back of the car.

"The one at the back seemed to have been the most affected."

She mentioned that the Mazda was between the first and second lanes.

She warns drivers to be extra careful when changing lanes especially when that road particularly has a number of motorcycles being ridden there daily.

The police have confirmed that they were alerted to an accident involving two motorcycles and a car along BKE towards Woodlands at 7.44pm.