Biker injured from accident with bus along Tampines Avenue 7 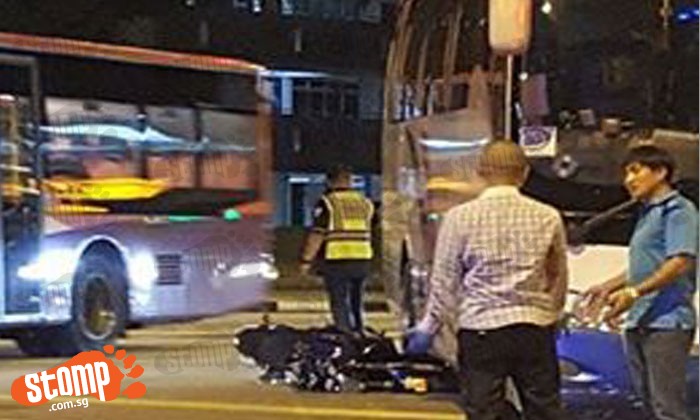 Stomper Haadii spotted an accident involving a motorist and a bus at the traffic junction between Tampines avenue 7 and Tampines street 34 yesterday(16 Nov).

The accident happened at around 11.30pm, near Tampines Junior College.

According to Stomper Haadii, the bus made a turn at the junction and he thinks that the bus hit the motorcyclist as the cyclist was at the blind spot.

The Singapore Police Force (SPF) was alerted to this accident at 12.05am on 17 Nov.

Both the motorist and pillion rider, aged 19, were injured and two ambulances were dispatched to the scene.

They were then conveyed conscious to Changi General Hospital.

The rider suffered from giddiness while the pillion rider had abrasions.

Related Stories
TP officer chases after motorcyclist who's going against traffic flow along Geylang Road
Auxiliary police officer dies after her motorcycle gets hit by another rider and she falls into drain in Johor
Reckless e-biker cuts into bus lane, nearly gets hit by bus and starts scolding bus driver
accident
motorcycle
Bus
Tampines