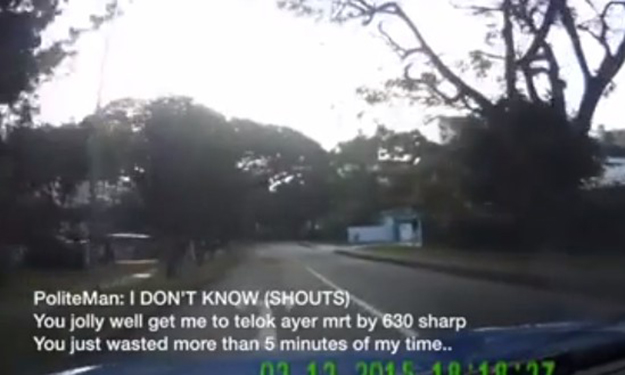 A passenger was heard shouting at a cabby for not picking him up promptly and even proceeded to backseat drive, not allowing other cars to cut in front of him.

This Facebook video on All Singapore Stuff was shared by someone who seemed to be the cabby's daughter.

According to the timestamp, this incident occurred on Mar 13 at about 6.20pm.

The passenger was first heard shouting upon pickup:

According to the video, this was because he had walked to the main road despite indicating "front of block", where the cabby was waiting.

He also proceeded to make a few other demands: He did not allow the cabby to turn on the meter till they got to the junction, wanted to turn the air-con up, and even told him he could not let others "cut [his] road".

The cabby ended up giving him a $5 discount at the end of the trip.

Watch the video below to see what happened.