Man trapped underneath car after accident at Sims Avenue junction 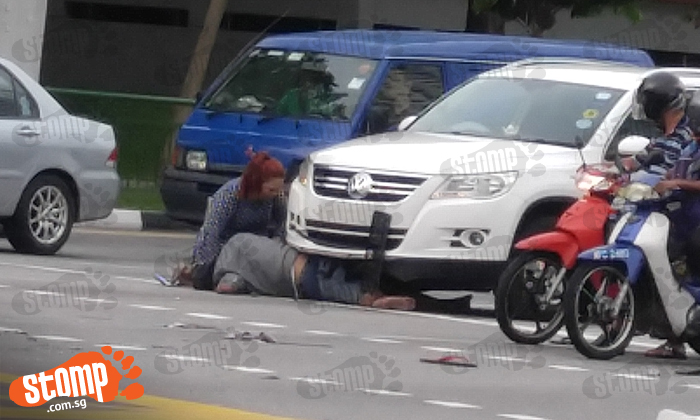 A man was trapped underneath a car after an accident at the junction of Sims Avenue and the Kallang–Paya Lebar Expressway this morning (Sep 8) at around 8.15am.

Stomper Jongka sent in photos of the accident, which involved two cars and a motorcycle.

The man, a motorcyclist, and his pillion rider were both sent to hospital, said Police.

"This happened today morning at 8.16am.

"I was shocked by what happened and when I saw the scene.

"A women was trying to help a man who had gotten trapped under a car."

A spokesperson for the Police told Stomp:

"Police received a call on 8 September 2016 at 8.02am, informing of an accident along Sims Avenue.

"Upon arrival, it was established that an accident involving a motorcycle and two cars had occurred.

"The motorcyclist and his pillion were conveyed conscious to Tan Tock Seng Hospital.

Stomper Henry and Esmond also contributed videos of the incident. Watch them below.