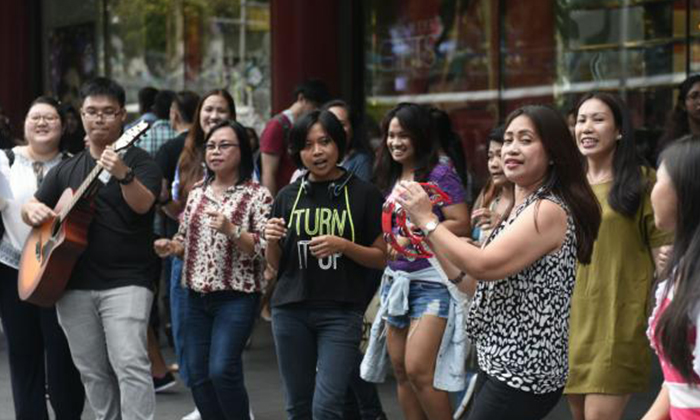 Christmas shoppers in Orchard Road were treated to a surprise yesterday evening as a 15-strong amateur choir of foreign domestic workers got off a bus and began carolling on the pavement.

The flash mob, organised by the Foreign Domestic Worker Association for Social Support and Training (Fast), featured carols like When A Child Is Born and Feliz Navidad, a Latin American Christmas song.

One of the choristers, Masyitoh, an Indonesian who goes by one name, is a Muslim whose parents support her carolling.

The 37-year-old, who has worked here for 18 years, said: "I joined because I love music and I want to learn singing. My parents supported me... They said it's about the singing, not religion."

The choir, formed only in October, was conducted by Ms Iris Koh, music and programme director of Singapore-based edutainment provider Candle Academy.

"I feel grateful to the domestic workers in Singapore, so I volunteered to train them," said Ms Koh.

It took her a month of three-hour sessions every Sunday to get them to listen to one another and sing in tune, as they had little or no singing experience.

"I feel a sense of achievement," said Ms Koh.

"And a little nervous... This is one of the first real flash mobs I have done!"

They started outside a crowded Tang Plaza at about 5pm, with a single voice leading off and progressively more voices joining in alongside a guitar and tambourine.

Curious passers-by stopped to listen, while some took photos and videos.

The group then moved on to Lucky Plaza, the Paragon and Ngee Ann City.

"The idea is to bring the joy out to the public... The girls also appreciate the potpourri of cultures in Singapore and embrace it through events like this."