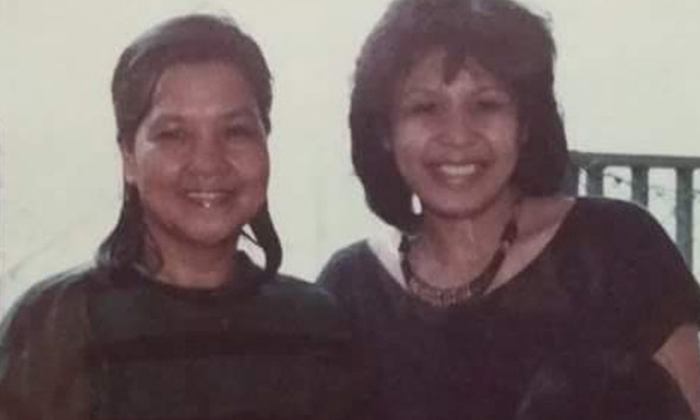 But like many domestic workers, she had her own children back home and missed them. After five years, she went back to the Philippines and hoped to come here again one day.

She finally returned here with her own family in tow, to reunite with her former employer, Madam Catherine Foo, and daughter Jamie Lim, who is now 37.

"Auntie Luz", as Madam Baraquel was affectionately called, looked after Ms Lim when she was four years old, and her brother Julian, who was then one year old.

There were smiles all round, but also poignant moments as Madam Baraquel, now 68, told of how she came here to work as a maid at the age of 34.

Speaking at Madam Foo's condominium unit in Upper Bukit Timah last Thursday, she told The Sunday Times the 300 pesos she earned a month as an elementary school teacher in the Philippines was not enough to support her three children. Her husband, a bus driver, did not have stable work.

So she made the difficult decision to leave her family for Singapore. She was employed by Mr Lim Pok Chin, founder of furniture company Scanteak, and his wife Madam Foo, who helped with the business, then named Hawaii Furnishing.

Madam Baraquel, who was homesick for the first few months, took care of the children.

The Lims, who then lived in a semi-detached house in Chai Chee, treated her like family. Ms Lim said: "She was strict with us and knew how to put us in our place."

Madam Foo, 61, said: "I gave her the authority to discipline them because I trusted her. If you love someone, you will not hit them."

The women bonded over their faith and Madam Baraquel was touched by her employer's generosity. She said: "Mrs Lim gave me a lot of good experiences and taught me a lot, like how to manage my money," she said.

The $300 a month she earned was equivalent to about 2,100 pesos then, most of which was sent back to her family along with 10kg boxes filled to the brim with goodies, including McDonald's Happy Meal toys gifted by Jamie and Julian.

After five years, she returned to Calapan city, her hometown.

"Julian cried a lot, we all cried. She was so much a part of our lives," said Ms Lim, whose brother was overseas during the reunion.

Although she lost touch with the Lims, she never forgot them and she reconnected with Jamie and Julian earlier this year through Facebook.

Madam Baraquel, who retired as a school principal, saved up for a trip here with her sister, daughter, son-in-law and granddaughter. She has two other children.

She said of the reunion: "I was speechless. I didn't expect them to be so kind to me and my family."

She also met some new members of the Lim family - Ms Lim's one- year-old son and three-year-old daughter.

Ms Lim said: "My children are about the same age as Julian and I when Auntie Luz was with us."

Madam Baraquel's daughter, Charity, 40, finally got to meet the Singapore family that she had heard so much about as a child.

"I was six years old when my mother left and it was hard not having her around. I used to be jealous of Jamie and Julian, like any kid.

"But it was worth it. Her salary paid for my education and my brothers' too. And the Lims treated her like family."

Madam Foo said that she hopes their story will encourage closer relationships between employers and domestic helpers.