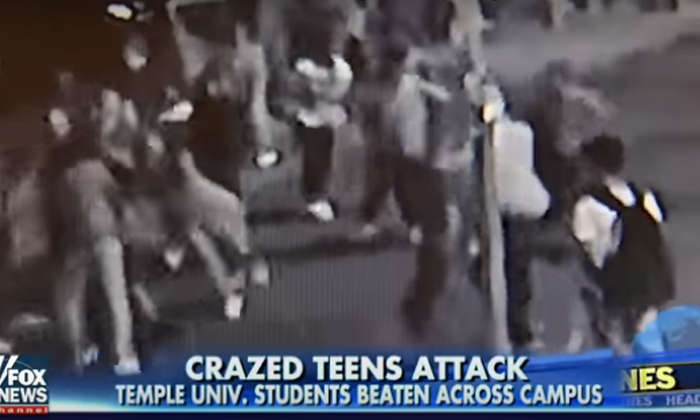 Last Friday evening (Oct 21), a ‘flash mob’ at Temple University in Philadelphia that turned violent resulted in four teens being arrested, countless innocent students attacked, and a police horse even got punched in the mouth.

According to Bro Bible, hundreds of youths used social media to coordinate a ‘flash mob’ on Temple University, but an estimated 200 teams swarmed the campus around 20 to 30 innocent students were attacked.

In the YouTube video below, adolescents are seen starting a fight with one another, as some are spotted standing around helplessly.

Temple University's student Christina Lauletta was coming home from a football game when she was pushed to the ground by a group of 30 teens and kicked.

Her head was stomped on and the whole side of her face, the back of her head was black and blue.

Employees at a pizza place across the street who witnessed Christina being attacked came and stopped the teenagers from hurting her any further, but she was left with her entire body badly covered in bruises.

The Temple University campus safety record shows that the incident happened around 8.30 to 9.30pm and there were two robberies, two aggravated assaults, three ‘simple assaults’, and two incidents of harassment.