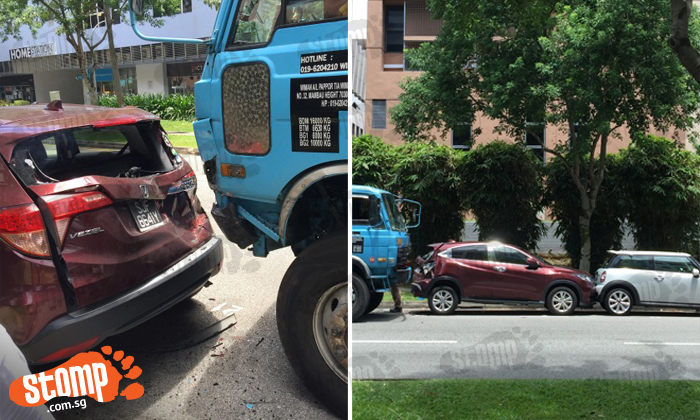 An accident involving a lorry, a truck and two cars occurred in front of the Enterprise One building along Kaki Bukit Road 1 today (Oct 18) at about 1pm.

Stomper Y Y Lee emailed photos and a video of the accident to Stomp, and said that the lorry driver suffered slight injuries.

"A Malaysia-registered truck could not stop in time and banged into three stationary vehicles, resulting in serious damages!

"A driver of the Singapore-registered lorry was in the vehicle at the point of collision and suffered slight injuries. He was sent to the hospital via an ambulance.

"The two others vehicles (Honda Vezel and Mini Cooper S) were empty when the collision happened."

"On 18 October 2016 at 1.14pm, the Police were alerted to an accident involving two cars and two lorries along Kaki Bukit Road 1 towards Kaki Bukit Avenue 1.

Related Stories
Lorry driver skids and slams into vehicle and wall -- after jamming on brakes to avoid car that had crashed
Who's at fault? Volkswagen collides with taxi at Anson Rd
Watch how driver causes chain collision at Bishan Road
Speeding driver slams car right into back of lorry on ECP
More About:
accident
chain collision
injured