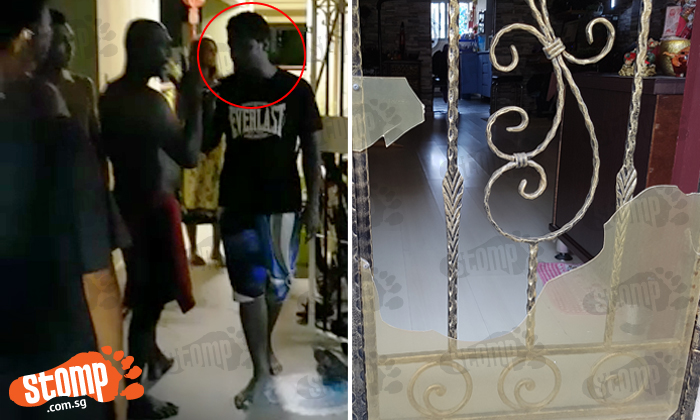 A resident staying on the sixth floor of Block 8 Lorong Lew Lian has been making his neighbours' lives hell by causing disturbances on numerous occasions and even getting into disputes with them since August.

Stomper NC shared two videos, which were filmed on Dec 7, showing the man behaving aggressively. She also said that he had broken the glass panel on the iron gate of her flat.

The first video appears to show the man in a dispute with his neighbours as another guy tried to restrain him. There were several bystanders at the scene as well, one of whom was holding a bamboo pole.

According to NC, the man with the pole is her husband and he was holding the object for 'self-defence'.

"He came charging at my man from the other end of the staircase. We have many neighbours as witnesses", said the Stomper.

In the second video, someone can be heard hurling vulgarities repeatedly. The male voice also shouted "chao ah gua" and "I see you, I hamtum you one more time!"

In both videos, broken pieces of glass from the NC's gate can be seen lying on the ground.

"This villain, staying at Block 8 Lorong Lew Lian, has been harassing the residents staying along the same corridor as his. He is renting the unit from HDB. Ours is a purchased flat.

"He kicked and broke the screen panel of my iron gate. He used vulgarities.

"He punched my husband and hit him in the groin.

"He slandered my name by saying that I bring many men home every day to f***. He asked me to suck his genitals.

"On New Year's Day, he played and blasted prayers for two solid hours. Nobody prays like this. We do not believe that people pray this way.

"Luckily, nothing happened but we could not watch the New Year show on our TV.

"There are many elderly residents here and they live in fear of him."

NC added that what makes things worse is that the man apparently sleeps in the day and hence, disturbs his neighbours during the wee hours of 1am to 3am.

According to her, she is at a loss about what to do as no action has been taken after calling the police. She also emailed the Housing and Development Board (HDB) recently, but has yet to get a response.