Jurong West hawker centre's rat problem may not be over yet: Site closed for 3 days 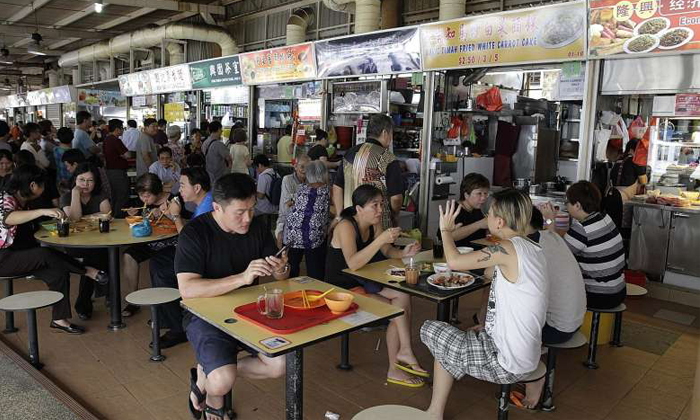 Three days, 20 pest control officers and 150 rat traps later, the rodent problem at the hawker centre at Block 505, Jurong West Street 52, may still not be over.

The National Environment Agency (NEA) has instructed the Jurong-Clementi Town Council overseeing the area's cleanliness to remove structures such as gutters that may harbour rats or serve as easy routes for them.

The town council must also seal off entry points in the upper roof structures, and rat-proof manholes and gully traps, a spokesman told The Straits Times yesterday.

Rat infestation was observed in various locations within the centre, such as the bin centre and roof structures above the stalls, she said.

The NEA said it received 18 cases of feedback on rat sightings in the area this year.

"The town council is to also continue with daily trapping of rats in the common areas, particularly at the ceiling and roof structures, bin centre and dish-washing area as a control measure," she added.

The hawker centre was closed for rat control measures and routine cleaning from Sunday evening to Wednesday.

Chairman of Jurong-Clementi Town Council and MP for Jurong GRC Ang Wei Neng said: "It is more effective for the town council to work with stallholders to engage the same vendor to do pest control, not only at common areas but at individual stalls as well."

The NEA spokesman said the agency had observed "poor refuse management" there, with clutter in common areas and bin centre that might serve as refuge for rats.

When The Straits Times visited the hawker centre yesterday afternoon, the common areas and bin centre looked neat and uncluttered.

The spokesman added: "NEA will continue to assist the town council and Hawkers' Association by reviewing rat control plans for the centre."

One reason for a persistent rat problem is increasing urbanisation, including the mushrooming of eateries with "greater availability of resources" for rats, said Dr Chan Hiang Hao, a medical entomologist.

Mr E. K. Ong, 56, who has been running a nasi lemak and fried bee hoon stall there for more than 10 years, said the problem will persist.

"As long as there is food, it is hard to get rid of the rats," he said, adding that he has noticed them scurrying along pipes near the roof.

The hawker centre was bustling with activity when The Straits Times visited at lunch time yesterday.

Some regulars said they had never noticed rats there before. Mr John Song, 71, a retiree, was unperturbed.

He said: "I grew up in a kampung, and there were rats running around then. I am not concerned, I think my stomach is strong enough."

But stallholders like chicken rice seller Lina Azman are worried. "We are dealing with food, so hygiene is very important," she said.