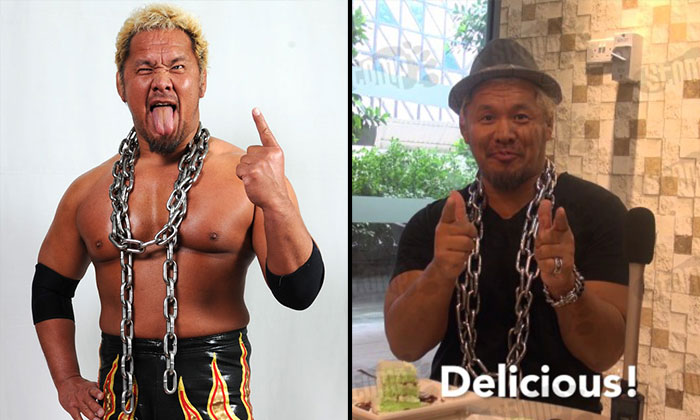 With his signature bleached blonde hair, wild-eyed expressions and abrasive demeanour, Shinya Makabe (better known by his ring name Togi Makabe) is certainly hard to miss for fans of the Japanese wrestling scene.

Popularly known as the “Unchained Gorilla”, the New Japan Pro Wrestler (NJPW) stands out as a brash, raucous presence as compared to his other more stoic members of the roster.

Makabe debuted in the year 1997, giving him 19 years of in-ring experience to date. The professional wrestler trained by and currently performing for New Japan Pro Wrestling (NJPW) -- where he is a former one time IWGP Heavyweight, two-time IWGP Tag Team Champion, and a two-time NEVER Openweight Champion.

In the run-up to his big match at Wrestling World 2016 in Singapore, the Stomp Team caught up with Makabe at Simply Sinless cafe, where he tasted some popular Singaporean snacks and shared little snippets of his life and career with us.

Wondering how he landed himself the title “Unchained Gorilla”? Makabe explained that he is known for his violent, bloody style, and illegal employment of steel chairs and chains into his offence, including a lariat with a chain wrapped around his arm.

As a professional wrestler, one would expect him to follow a strict clean diet to compliment his tough training regime. Which he does on most occasions.

He avoids oily and high-caloric foods on a regular basis, and exercises everyday to maintain his strong physique. From walking, to running, to loads of squats and of cardio -- these help prepare him for an upcoming match.

However, much like any other human Makabe does have his weakness -- in his case, his sweet tooth. His favourite dessert of all time is the sinful Mont Blanc. And he loves the whipped cream that comes with all the pureed, sweetened chestnuts best.

But of course Makabe cannot possibly have a serving of Mont Blanc everyday, he too has a list of dietary restrictions to follow. Instead, he opts for healthier desserts that are low in fat and calories whenever he has a craving.

Watch the priceless reactions of the Unchained Gorilla in the video below,  as he tries out some popular snacks in Singapore for the first time!