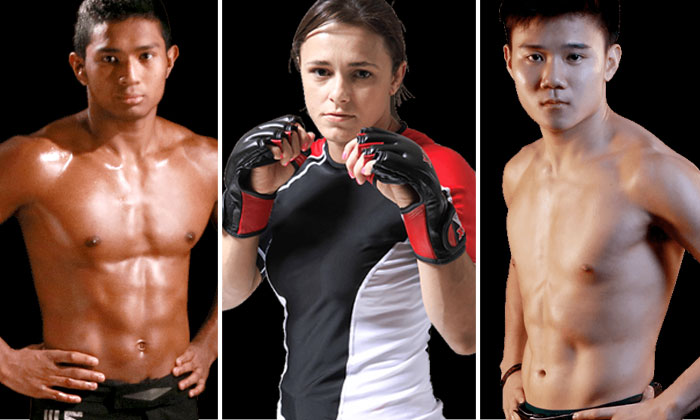 Singaporeans Benedict Ang and Amir Khan and Brazilian Michelle Nicolini have made their waves across the MMA scene for their fighting prowess displayed at various fighting competitions.

The athletes, all part of the elite Evolve MMA Fight Team, will be putting their skills to the test on November 11 once again at One Championship's 'Defending Honor’ where they will square off with opponents from all over the world.

The fighters have been training hard under the close watch of MMA world champions at Evolve in the run-up to their big fights. Although the trio will be up against more experienced fighters, they have told Stomp that they are confident of beating their opponents.

Currently 20 years old, Benedict is an assistant instructor at Evolve MMA Singapore and was previously a Sports Coaching student at Republic Polytechnic.

Ever since he was a kid, Benedict had already displayed his interest in the martial arts scene. He began his martial arts journey at the tender age of nine with Wushu. At 17, he joined Evolve and started training under MMA veteran Eddie Ng. Benedict was inspired to follow in the footsteps of his instructor after seeing him compete at ONE Championship.

The undefeated Singaporean featherweight will take on Ahmed “The Wolverine” Mutjaba, at ONE Championship's 'Defending Honor' this Friday.

Like his Singaporean counterpart Benedict, Amir Khan is currently also an assistant instructor at Evolve MMA. Specialising in Muay Thai, Amir has been touted as an up-and-coming MMA fighter in Asia.

He has earned the nicknamed “Golden Boy” since he clinched the Muay Thai title in Phuket’s Bangla Stadium.

Fearless as he prepares for his upcoming battle with Veteran Vaughn “The Spawn” Donayre -- a Filipino mixed martial artist and Pan Asian BJJ Champion who holds an 8-5 record, Khan told Stomp that he is aware of his opponent’s strengths but is confident that he will still emerge victorious.

The 34-year-old has a wealth of experience in martial arts, She is a multiple-time ADCC World Champion, a World Pro Cup Champion, World No-Gi Champion, European Champion and Pan American Champion.

Nicolini will be facing Egypt’s 27-year-old Mona Samir this Friday.

The Stomp team caught up with Benedict, Amir and Michelle on Tuesday (Nov 8). They shared with us how they are preparing for their upcoming fights as well as snippets of the life outside the MMA cage. Have a look at what they have said in the gallery below.

Related Stories
What's the most useful MMA skill a fighter should have? Tell us and stand to win ONE: Defending Honor tickets and other goodies
S'porean Tiffany Teo set for ONE Championship debut at ONE: DEFENDING HONOR
mma
ONE FC
martial arts
competition
mixed martial arts
fight
singapore