'I want my daddy,' cries girl whose dad died attempting to save her at JB waterfall 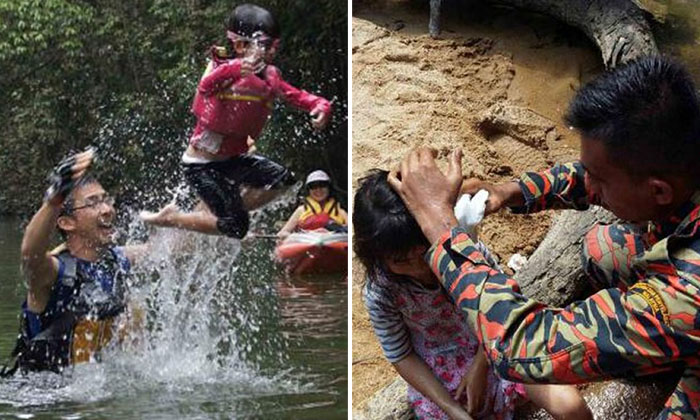 After trekking through the jungle to reach the scene of an accident, the fire department chief was met with a heart-rending sight.

Despite being hurt, a young girl sat next to the prone body of her father, weeping while trying to rouse him.

She cried out, "Daddy, daddy, I want my daddy" between sobs while shaking him with her tiny hands.

But there was no response.

The Singaporean had been trekking with his wife, Madam Chua Soo Hoon, 46, and their daughter Rachael, seven, at the Gunung Pulai Recreational Forest near Kulai, about 40km from Johor Baru, on Sunday when the tragedy occurred.

Malaysian media reported that Mr Cho fell 20m from the top of a waterfall and hit his head on the rocks below trying to save Rachael, who had slipped.

In a statement yesterday, Madam Chua said that she and her husband had tried to grab Rachael after she slipped near the water, but all three slid down about 10m together.

The Kulai Fire and Rescue Department received a call for assistance at 12.55pm, about five hours after the family had started their trek, reported The Star.

Mr Khairi said that Rachael crying over her father was one of the saddest moments he had ever experienced.

"She was next to her father who was not responding to her cries," he said.

He said that Madam Chua, who had a broken nose and multiple cuts and bruises on her body, had walked to a small access road to get help.

"We found her on the road and she showed us where they were in the forest," said Mr Khairi.

"She wanted to follow us back, but I didn't let her."

When Mr Khairi and six of his men found Rachael with her aunt and cousin, she was inconsolable and visibly tired.

She did not seem aware of the 3cm gash on her forehead, nor the cuts and bruises on her arms and legs.

Feeling sorry for the child yet knowing he had a job to do, he slowly prised her hands from the body.

Mr Khairi then picked her up to carry her to safety. He was exhausted from the trek to the accident site as he was fasting, but knew he had to press on for Rachael's sake.

"I carried her on my shoulders all the way," said the six-year veteran of the Fire and Rescue Department.

He had to wade through deep waters and climb over slippery rocks for 30 minutes to reach the ambulance.

His men used the same route to carry Mr Cho's body out on a stretcher. At the ambulance, paramedics confirmed that Mr Cho, who had a fractured skull, was dead.

Mr Khairi said that while the forest is popular with tourists and locals, not many people visit the waterfall.

"To my knowledge, only military personnel would go to the area," he said.

Madam Chua and Rachael were taken to Kulai Hospital and were later transferred to the National University Hospital in Singapore.

Madam Chua has been discharged, but Rachael remains warded in the intensive care unit.

Lianhe Wanbao reported that she underwent surgery yesterday because of swelling in her head.

When tragedy struck at a Johor waterfall on Sunday, the Chos fell together, as a family.

"It was a miracle that Rach (their seven-year-old daughter, Rachael) and I survived the fall, but it took away our beloved Dave," said Madam Chua.

"He died doing what he loved, in the great outdoors he embraced." Madam Chua, who declined to be interviewed yesterday, issued a statement later through a family friend, Mr Sim Cher Huey, who is in his 40s.

He is the owner of kayakasia.org. In the statement, Madam Chua said the family had been to the Gunung Pulai Recreational Forest in Johor to trek several times and were familiar with the terrain.

"Dave loved the great outdoors and Pulai is only about an hour's drive (from our home in Singapore)," she said.

"Each time we went, we trekked around different parts of the river."

Describing the incident, she said her husband was "in his element" when they were trekking and he was "confident but careful as always".

"Climbing up the sides of the waterfall was easy," said Madam Chua.

"The rocks were dry and inclined, providing good grip."

After reaching the top of the waterfall, they decided to have a rest.

"We were resting on dry ground at the top of the waterfall when Rach accidentally slipped near the water," she said.

"Dave and I tried to grab her but could not hold on to anything to anchor ourselves.

"We slid for about 10m together - as a family - before he eventually left us."

She said Mr Cho was still breathing, but bleeding heavily at the bottom of the waterfall.

"Our friend with us, who is a doctor, stayed to take care of him while I trekked back to the access road to seek help."

Mr Cho was later pronounced dead by a paramedic. He was an avid kayaker and outdoors lover who went on many expeditions.

Mr Sim, who had been friends with Mr Cho for 10 years, said he was fit, and would often go on adventures with his family.

He added that he was also a "marvellous father".

Madam Chua said she appreciated the concern for the family, but asked for their privacy to be respected at this time.

Attached with the statement was a photograph of Mr Cho with Rachael from a previous kayaking trip.

This was how Madam Chua wanted him to be remembered - doing what he loved most with his family.

"Dave lived his life to the fullest," she said.

"His spirit will always be with us."