I had to sell flat, give up on uni dream: Son of cabby killed by drink driver 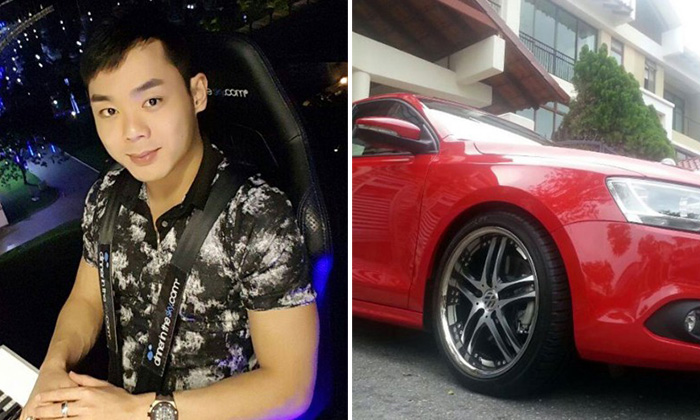 After graduating with a diploma in information security in 2013, he had planned to further his studies in university.

But one's man folly in driving while drunk not only ended Mr Sim Ying Chong's dream, it also made him lose his father and his home of 17 years.

The drink-driver's car crashed into his father's stalled taxi on the Pan-Island Expressway (PIE) after the Bedok North Road exit in the early hours of March 18 last year.

Mr Sim's father, Mr Sim Beng Guan, 59, was seriously injured in the accident. He remained bed-bound and uncommunicative for eight months until his death last November.

Raymond Chiang, 29, pleaded guilty to drink-driving and doing a negligent act not amounting to culpable homicide on Wednesday.

He was sentenced to four months' jail, $4,000 fine and disqualified from driving for eight years.

He told The New Paper on Wednesday: "My father had hoped for me to further my studies, but because of his sudden death, I had to find a job to support myself instead of going to university after completing my national service (NS)."

Mr Sim, 24, who now works as an IT developer, said he and his older sister had lived with their father in his four-room flat in Yishun for the past 17 years, after his father and mother got divorced.

Mr Sim said he earns about $2,300 a month, and contributes about $500 to the household expenses, with his mother and sister also chipping in.

The family also had to sell his father's flat and downgrade to a three-room-flat nearby, which they will move into when the paperwork is completed.

"My dad used to pay $1,600 a month for the mortgage. But after the accident, we had to ask Housing Board for financial assistance, and we had to stop paying for a while."

Mr Sim said he took leave and went with his sister, to attend Chiang's sentencing.

"It was our first time seeing the driver," he said.

"He never once went to the hospital to visit my father or paid his respects at the wake."

Mr Sim felt the sentencing was too lenient because a life was lost.

Growing up in a single-parent family, he said his father had it tough.

"My father was the sole breadwinner of the family, and he had to work two jobs to support us - real estate agent by day and taxi driver by night - for the past 14 years.

"We had to learn to be independent at a young age because my father would always come back when we were asleep."

Mr Sim said his father was a jovial man despite having to work long hours.

He said: "He was a very sociable man. He always cracked jokes and livened up the mood, whether at home or with his friends.

"Now that he is gone, I feel empty inside."

Asked about his father's accident, Mr Sim said: "Back then I was still in NS. When I woke up at around 4am, I realised I had received a lot of missed calls from the hospital."

Mr Sim, who was based at Jurong Camp 1, rushed to Changi General Hospital but did not think it was a serious accident because his father was a safe driver.

"It was only when the doctor told me of his injuries that I realised it was very bad."

Mr Sim said that after the ordeal, he had become closer to his mother, Madam Cindy Ng, 56, who owns a beauty salon, whom he used to see only once a week in the past.

He said: "But after this happened, I met her quite often to visit my father. She was sad and felt he did not deserve this.

"My sister will be moving out next year. My mother and I will be living in the new flat."

A previous drink driving conviction did not stop him from having two glasses of red wine and driving home with his then-fiancee in the wee hours of March 18 last year.

Raymond Chiang Zhi Hao's blood alcohol level was almost twice the prescribed limit when his car rammed into the rear of a stationary taxi on the Pan-Island Expressway (PIE) in the direction of Changi Airport.

Taxi driver Sim Beng Guan, 59, who was standing outside the taxi, was severely injured. He never fully recovered from his injuries and died eight months later.

On Tuesday, Chiang, 29, pleaded guilty to one count of causing death by negligence and another for drink driving.

He was sentenced to four months' jail and a fine of $4,000, and was disqualified from driving for eight years.

A 2010 conviction for drink driving, where he was fined $2,000 and disqualified from driving for a year, was taken into consideration during sentencing.

Court documents said Mr Sim's taxi was involved in an accident with a lorry near the Bedok North Road exit of the PIE at 2.26am on March 18 last year.

After the two drivers exchanged particulars, the lorry driver left.

Mr Sim's taxi remained parked between the left-most and centre lane of the three-lane highway after he declined the lorry driver's offer to help move the taxi to the road shoulder.

The front and rear lights of the taxi were switched on, but the hazard lights were not, and Mr Sim was standing outside the vehicle.

Closed-circuit television (CCTV) footage from cameras situated along the highway showed a number of vehicles avoiding the taxi by filtering to the right lane.

The court heard that the accident happened at 2.42am when Chiang's car, which was in the centre lane, made no visible attempt to slow down and hit the right rear of Mr Sim's taxi.

The impact caused the taxi to spin and land on the road shoulder against the flow of traffic.

CCTV footage did not show precisely where Mr Sim had been standing, but he was severely injured and was bleeding profusely from the head.

Mr Sim, Chiang and his fiancee, who is now his wife, were all taken to hospital.

Mr Sim's injuries included fractures on his skull and ribs, haemorrhaging in the brain and a collapsed lung.

He was bed-bound and uncommunicative until his death on Nov 22 last year.

An autopsy report done the day after stated that he died from pneumonia as well as brain and lung injuries from the accident.

Chiang could have been jailed for up to two years and/or fined for causing death by negligence.

What drivers should do after an accident

When a road accident occurs, the driver must turn on the hazard lights of the vehicle, call an ambulance and the Traffic Police if someone is injured, and place the triangular hazard sign at least 300m away to alert other motorists moving towards the vehicle.

In giving this advice, Singapore Road Safety Council chairman Bernard Tay noted that in a minor accident, the driver should move the vehicle to an area away from oncoming traffic so it would not block the road or jeopardise his safety.

If the car has broken down, the driver should move to a safe spot away from oncoming traffic. If that is not possible, he should position himself so that the car is between him and oncoming traffic.

Singapore Safety Driving Centre operations manager Gerard Pereira, 59, said drivers who leave the vehicle on the road and stand there after an accident assume other drivers can see them, but that may not be the case.

While drivers tend to be more careful when the road is busy, they may be less attentive and may drive faster when the road looks clear, so they may think the stalled vehicle in front is moving when it is not, he added.

On March 28, a drink driver slammed his father's Volvo into a Nissan sedanat the junction of Changi Road and Frankel Road.

The Nissan driver was trapped under the car while her husband, who was in the front passenger seat, ended up hanging out of a broken window.

Alvin Phua Lai Soon, 32, was jailed for 14 weeks and banned from driving for 20 years on Aug 2 this year.

A multiple offender, he had been serving a 10-year driving ban when he caused the accident.

A delivery driver fell asleep at the wheel and drove his lorry into a stationary van, knocking it into two men who were standing in front of the vehicle.

The crash killed one of the men and left the other permanently disabled.

The force of the impact sent the van into another car and caused a massive traffic jam on the Bukit Timah Expressway.

On Sept 9 last year, the driverwas jailed for three months and banned from driving for five years for causing death and grievous hurt by a negligent act to endanger life.

On Aug 9 at 3.54am, a former logistics operations director, 36, sped and drove under the influence of drugs and rammed into four people who were standing at the back of their stationary car. All four were killed.

Their car had stalled due to a punctured tyreat the chevron markings before the exit to Yio Chu Kang Road along the Central Expressway.

The man was given the maximum sentence of five years' jail on June 19 last year and banned from driving for 20 years.

Related Stories
Wife of diver killed by stingray: 'I can't believe he's gone'
62-year-old woman believed to be jaywalking killed after getting hit by truck along South Bridge Road
68-year-old grandma killed by road sign: She was a jovial woman close to her family
More About:
Cabby killed by drink-driver
accident
fatal