68-year-old grandma killed by road sign: She was a jovial woman close to her family 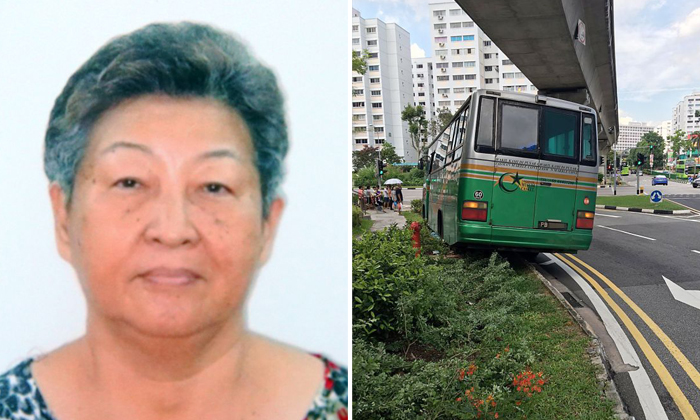 Madam Ong Lim, 68, who was tragically killed in a freak accident after being hit by a road sign which was dislodged by a runaway funeral bus last Friday (Sep 2) at Bukit Panjang, was described as a 'jovial woman'.

According to The New Paper, Madam Ong would head to the market near her Cashew Road flat to do her shopping almost every morning.

He says: "The market is about a 10-minute walk away from her flat at Block 133, Cashew Road, and she would go there every morning.

"On Friday, she decided to take a taxi home as her legs hurt. She was also carrying several plastic bags."

The Straits Times reports that the bus from funeral services firm Singapore Muslim Casket and Marble Contractor rolled down the slope, mounted the pavement and hit a road sign.

The road sign hit Madam Ong on the head, and also left her with a deep cut on her leg.

She was taken to the National University Hospital (NUH), where she died from her injuries at around 11.15am.

The driver had reportedly left the vehicle for a toilet break before the accident and had engaged the handbrake.

Her granddaughter, Madam Agnes Chai, said she found out about the accident while she was at work.

"My grandmother was a happy, jovial woman who was very close to her family... She would call my mother for a chat on the phone every day," said Ms Chai, whose mother is Madam Ong's eldest daughter.

"We are very shocked that this has happened."

A spokesman from the funeral services company said that its driver had parked the vehicle and ensured it was stationary before proceeding to a nearby mosque.

They said the driver involved in the incident has been with the company for more than 10 years and has never been involved in other accidents before.

But Madam Ong's family is now calling for eyewitnesses or video footage to determine if a driver had been on board when the incident occurred.

The family has also lodged a police report on the matter.

Police confirmed that a report was made and that investigations are ongoing.