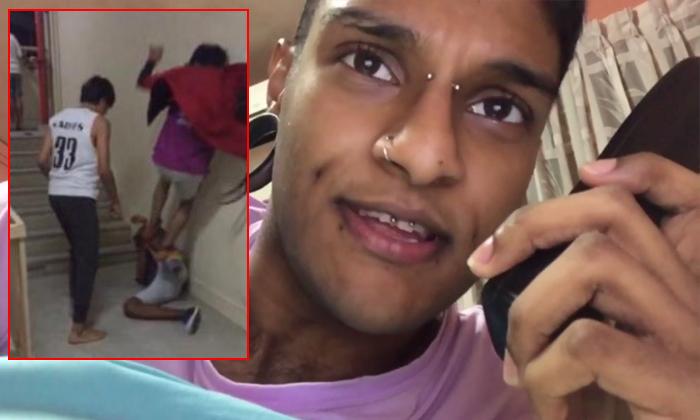 A local YouTuber claims to have prank-called one of the bullies who was caught on camera bashing up a boy at a staircase landing recently, hence revealing more details about the shocking incident.

Earlier, Stompers Veera, Raez, Zianna, Kenny, Nasslina, Esther, and Helene had alerted Stomp to what happened after a video showing the abuse was shared online.

The clip showed a group of youths -- one of whom was wearing a 'Saints' T-shirt -- raining blows on a boy and even jumping on the latter's legs.

More details about the controversy have apparently been revealed, after YouTuber Popo AsphyxiatesPanda said he prank-called one of the alleged bullies and shared the conversation they had.

A video dated Nov 11 shows Popo asking the bully why he and his friends had gone to 'whack' the boy.

The alleged bully went on to give the "full story" and said that there had actually been nine people from his side present at the scene.

According to him, there were so many of them instead of just "five to six people" because the "other side" (the one who got beaten up) had apparently claimed he would be "bringing 20 people down".

"That's why I bring nine people. Then after that in the end, the other side three people come out, you cannot blame us what," said the bully.

Asked what the dispute was all about in the first place, the bully alleged that the boy who was beaten up had told the bully's friend that "two people cannot take him down one person".

He then pointed out that the 'Saints guy' had said to his victim in the video, "I make sure I whack you until you drop" in response to that claim about not being able to be taken down.

The bully can also be heard saying in the phone call, "You must understand this problem is not we want to find one ah. Is they find with us one. Is other people find problem with us. Then we go down."

Popo then asked the guy if comments about the victim getting people to beat the bullies back were true.

The bully can be heard responding on the phone, "His auntie and uncle come and find my friend, then they slap him, like punch back all la."

According to the bully, there are hence now three police cases (the victim's auntie's, the victim's uncle's and his own).

It also turned out that the bully had already been expecting the prank call from Popo.

The bully also gave Popo the green light to post the video of their conversation online and said he wants to tell people that "If they don't know the full story, don't come and talk shit with me."

Listen to their conversation in the video.

In response to an earlier Stomp query, the principal of Saint Andrew's Secondary School, Mrs Lucy Toh, also confirmed that some of the students involved are from her school.

"The school is working with the police in their investigation and therefore is unable to comment further." she added.

The Ministry of Education (MOE) also said it is aware of the incident.