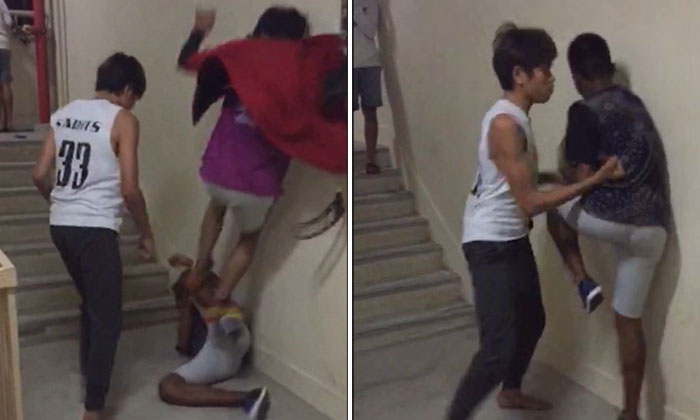 Submitted by Stomper Veera and Reaz

Regarding the youth in the Saints T-shirt, Stomp is trying to ascertain if he is indeed from St Andrew's Secondary School, although a source has informed us that he recognises the boys in the video.

Stomp will be contacting St Andrews Secondary School to establish whether their students are indeed involved in the incident.

Responding to a Stomp query, Police has said that they are investigating an incident seen in a video showing a boy being beaten up badly by a group of bullies.

Stompers Veera and Reaz alerted us to the video, which police said a report was lodged on.

Meanwhile, Reaz came across it via Salihin Osman's Facebook page where the video was also posted at around 4pm.

The video was captioned, "I feel so sad when the guniang gang up on 1 person. Please report them!! Old or new video I don't know, I'm just sharing it. #Saynotobullies", and has been going viral ever since.

The heartbreaking video shows a teenage boy being badly beaten up by a big group of bullies at a staircase landing.

The boys are seen taking turns to whack the helpless teen, pinning him to the wall -- punching, kneeing and kicking him to the ground. One even jumped on his legs while he was on the floor.

"Police confirm that a report was lodged and investigations are ongoing."

"There are quite a few things I have to say after watching this video, number one is definitely how atrocious their behaviour is.

"Number two, no one came forward to help the boy.

"As seen from the video, the more 'wannabe' ones treated him like a punching bag.

"Also, what are the boys trying to prove from this video?

"Such 'smaller-scale' incidents can lead them to engaging in even more serious things if they don't get caught.

"They are not in their uniforms, but they really need to be identified and taught the correct things before they do more than this.

"Because right now, this is only going to only boost their confidence."

One of the boys can be seen wearing a 'Saints' top which is a St Andrew t-shirt. However, it is unclear which school he belongs to.