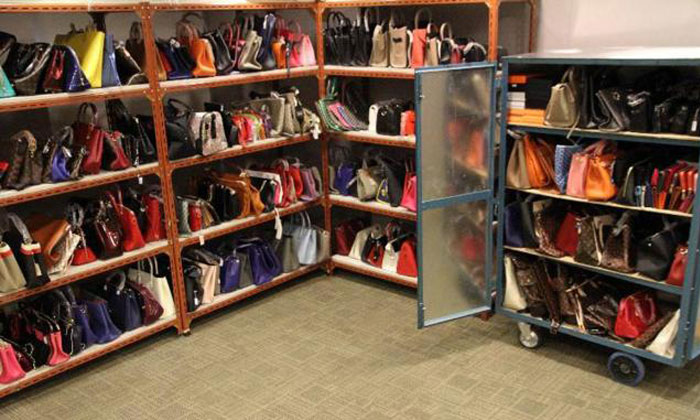 Officers also arrested 10 people in the raid at the market - which is well known among tourists for its cheap knock-offs - in Tung Choi Street in Mong Kok last Thursday, the Customs and Excise Department said in a statement last Friday.

Some 90 officers raided four stalls, a second-floor showroom and four warehouses during the operation, the statement added.

The items seized included handbags and leather goods as well as four tablets used to display a catalogue of the goods.

The raid, the third at the shopping hot spot carried out by Customs this year, shows that counterfeit activities continue to thrive in the city despite attempts to snuff them out.

The syndicates are now more careful and have switched to targeting Western tourists.

Mr Guy Fong, head of the Customs' Intellectual Property Investigation (Operations) Group, told Hong Kong media that the fakes were sold exclusively to tourists from Europe and the United States.

When approached by local or Asian customers, the hawkers usually declined to sell, claiming that there was no more stock, he said.

Among the people arrested were the two alleged ringleaders of the gang. One of them, a woman, brought in the fake goods from China, Mr Fong said.

The other, a man, oversaw sales in Hong Kong.

Singaporean tourists who visit Hong Kong regularly told The Straits Times that shopping has becoming less of a draw in recent years, especially when it comes to places like Ladies Market.

"I don't go to Ladies Market anymore as it's so crowded," added the former finance executive.

"The last time I went to Ladies Market was five years ago. I used to go there to buy bags, clothes, socks and other accessories," said school teacher Megan Lim, 38, who visits Hong Kong once a year.

"Now through online shopping, I can get them directly from China, and at cheaper prices," she said.

She noted that the Hong Kong authorities have been cracking down on the sellers regularly, but "it doesn't seem to be very effective".

In the Customs' previous two raids at Ladies Market in January and August, 12 people were nabbed and fake goods worth HK$7.5 million were seized.

It also smashed another syndicate in Central in January, seizing fake products worth HK$480,000.

Other than popular shopping areas like Mong Kok and Central, Customs has also conducted a city-wide crackdown on fake cosmetics, skincare products and portable fans this year.

In 2014, it seized HK$84 million worth of fake goods across the territory, according to its website.

It began investigating the Ladies Market racket after receiving a tip- off a month ago.

The syndicate used four stalls to display a small number of fake goods to attract customers, and tablets to show photos of other items.

They brought out the goods only when customers were ready to buy. The latter would also be taken to a second-floor showroom to browse further.

Consumers, he added, likely knew that they were fakes.