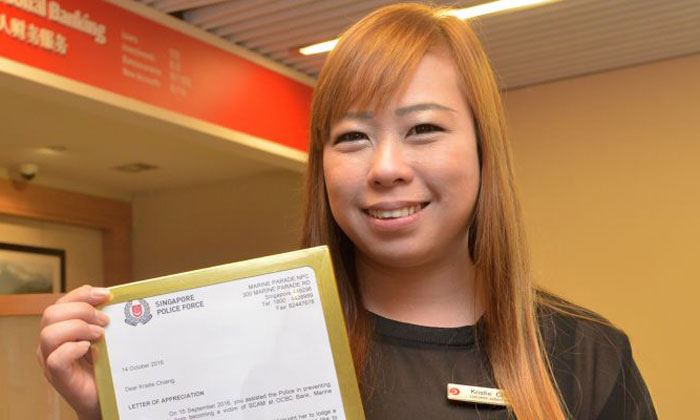 Over several hours, a bank customer service manager patiently tried to convince a client, who was trying to send money to Malaysia, that she was the target of a love scam.

Eventually, 39-year-old Kristie Chiang, who works at the OCBC Marine Parade branch, got the woman to file a police report against the man who tried to cheat her.

At about noon that day, a visibly flustered elderly woman wanted to transfer RM5,000 to a person in Kuala Lumpur.

The customer told Ms Chiang that she needed to transfer money to a bank account in Kuala Lumpur urgently, as her "friend" Kelvin, who claimed to be a Singaporean pilot, had been detained there for smuggling gold ornaments.

The money would be allegedly used to pay fines to a customs officer.

But there were three suspicious signs: The name of the recipient's bank account did not match the friend's, it was a Kota Kinabalu account and if the friend had been detained, how was he able to freely use his phone?

Ms Chiang said: "At first, I walked her through all the suspicious details, like the mismatched bank account name and location, and him having a phone despite being in lock-up.

Other signs hinted at a potential love scam, such as the age gap between the two and the terms of endearment they exchanged with one another.

But the woman insisted on remitting her money, claiming that a successful pilot would not attempt such a ploy.

After getting her number from the woman, her "friend" then called Ms Chiang, pleading and crying to send the money urgently.

"I told him: 'You need to help me help you by giving me more details like your Identification Card number,' but he refused," said Ms Chiang.

They ended the call but a woman claiming to be a customs officer from Kuala Lumpur International Airport (KLIA) then rang Ms Chiang, requesting the money. But the caller was unable to prove her occupation.

At 3pm, after circling around the same suspicious issues Ms Chiang had pointed out earlier, the customer finally agreed to file a police report.

"I told her that filing a police report would help her check if he was stranded in KLIA, and the police could then help him. Even at the police station, she kept asking the police if they could help extricate her friend," said Ms Chiang.

The customer went home but Ms Chiang spotted her again at about 6pm. "She knew that it was a scam, but decided to transfer the money after praying at home," said Ms Chiang.

"We couldn't do it for her. It may be RM5,000 today, but what about tomorrow? It is my duty as a bank employee to protect my customers and their assets."

OCBC said its staff are trained to spot potential victims of fraud by studying the customer's expressions and to check if the amount of money to be remitted is consistent with the customer's usual transaction pattern.

The staff are also on the alert for customers who are unable to give a logical reason for remittance or who cite a similar reason to previous scam cases.

On the police recognition of Ms Chiang's role in foiling the scam, OCBC Marine Parade branch manager Samuel Wang, 32, said: "I feel very proud of her. She really went out of her way to ensure what's best for her customer.

"Our staff are well trained, and the responsibility to prevent such crime does not lie with the police alone, but also our staff."

An elderly female customer had gone there at about 3pm on Oct 4 to transfer $53,000 to an account in Kuala Lumpur.

But Ms Cindy Lim, 51, grew suspicious when the woman requested not to disclose her bank details to the recipient.

Ms Lim probed further and discovered that the woman's "friend" claimed to be a young American doctor she met through Facebook about five months earlier.

Ms Lim told The New Paper: "We told her we needed approval from the headquarters before processing her request. She was cool throughout, but maintained that she needed to transfer the money urgently."

Ms Lim showed the woman two reports on love scam cases - similar to her situation - in English and Mandarin.

"She refused to read it at first. She insisted on sending the money over, saying that she wouldn't blame the bank for it and that the experience would just be a hard lesson for her."

"I just kept repeating that the money could not be transferred without the headquarters' approval and kept pushing her to read the articles," she said.

After about three hours, the woman relented and read the reports.

Ms Lim took the chance to ask her once more to file a police report and this time, the woman nodded.

"I thank the bank for continually training us to be vigilant and to look out for our customers," she said.

Related Stories
Cyber security expert tracks down scammer’s family on FB -- and gets desperate apology in 10 mins
Loanshark attempts to scam Stomper by threatening to rape him and kill his family
iPhone 7 'seller' scams a dozen of more than $10,000 on Carousell
More About:
Bank worker foils love scam
scam
bank