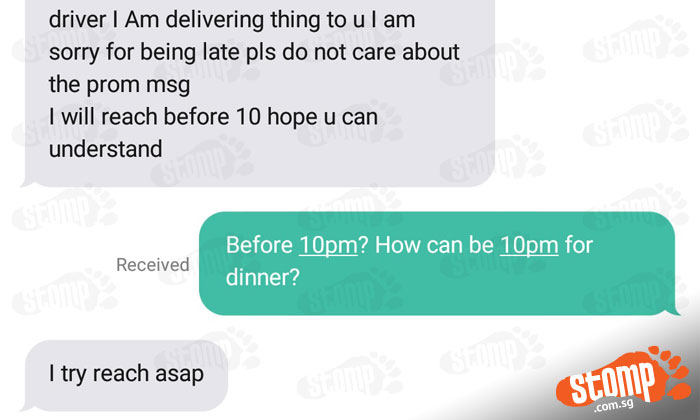 Can you imagine waiting four hours for your food to be delivered to you?

Well, that was what happened to Stomper Heng Thye who placed an order from Ding Xiang Seafood yesterday (May 7).

According to the Stomper, the advertisement stated that delivery would be made on the same day of the order and that the delivery time would be between 5 to 8pm.

"At 6pm, I received a message indicating that my food had been collected by the delivery guy and was en route to me.

"The message indicated that the food should reach me by 7.29pm."

However, the Stomper received another message at 6.56pm from the delivery guy telling him to ignore the previous message and that the food would reach by 10pm instead.

"I immediately responded to ask what this extreme delay was about but the delivery guy no longer responded to me.

"At 8.40pm (way past the committed timing), I decided to call Ding Xiang Seafood demanding to know the status of my dinner.

"The restaurant could only respond to me that it's out of their hands since my order was already with the delivery guy since 6pm.

"So basically, as a customer, I'm out of luck.

"After trying several times to contact the delivery guy, he finally called back and said it should be before 9.30pm, but he never showed up.

"The food that was meant to be our dinner finally arrived at 10.10pm.

"I checked the food and it was already cold and smelled odd.

"I asked the delivery guy why the delay and he could only say that it was because there was a new driver.

"This duration exceeds the National Environment Agency (NEA) guideline which states, 'No food should be kept in room temperature for more than 4 hours from the time it is cooked at the caterer’s kitchen to the time it is consumed.'

"This really shows the ugly side of food delivery services in Singapore which I feel needs to be regulated."

Related Stories
AIA staff posts photo showing customer's NRIC number on Instagram Stories
Why is there a range of prices for the same beverage at different dispensers?
$430 drawer cabinet filled with roaches -- but boss of shop says it's 'not her problem'
bad service
delivery
delivery driver
food
disappointing