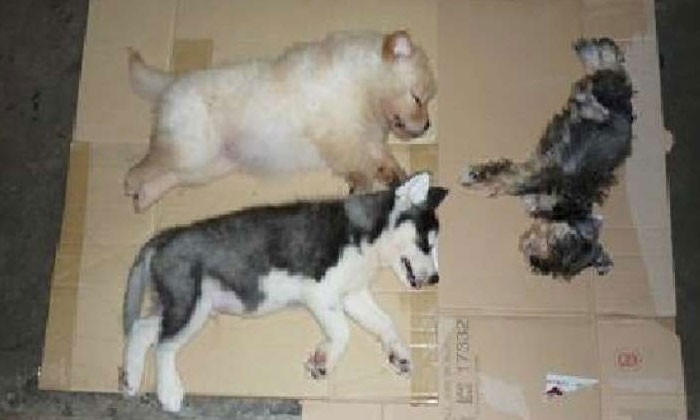 A 34-year-old fish farm operator crammed three puppies - a chow chow, a Siberian husky and a schnauzer - into a speaker box in his car boot and then drove across the Causeway to Singapore in April, a court heard.

Immigration officers at Woodlands Checkpoint found the sedated puppies and referred the case to the Agri-Food and Veterinary Authority of Singapore (AVA).

On Wednesday (Aug 24), Loh Chee Chiang was jailed for six months after he pleaded guilty to two charges: one count of importing live animals without a licence and another of causing unnecessary suffering to animals.

The court heard that Loh drove to Malaysia on the afternoon of April 20.

There, he visited a pet shop near Sentosa, Johor Baru, which sells puppies.

While Loh was looking around the shop, the owner asked if he could help take some puppies to a friend in Singapore.

Loh agreed and the owner had a thorough look through Loh's car.

The owner told Loh he could hide the puppies inside the woofer speaker box in the car boot.

Loh handed over the speaker box to the shop owner for modification before returning to Singapore at about 5pm.

The next evening, Loh drove across the Causeway and reached the pet shop at about 10pm.

Loh had snacks and chatted with the owner, before he saw the latter feed each puppy a white pill.

When the puppies were drowsy, the owner placed them into the woofer speaker box.

He told Loh to drive to a carpark in Marsiling, where a man would collect the puppies and pay him $800. Loh drove back across the Causeway after midnight.

But his car was stopped at Woodlands Checkpoint for checks.

AVA prosecuting officer Yap Teck Chuan called for a stiff sentence, saying such offences are hard to detect given the large volume of traffic into the country.

"(Loh) could easily have evaded detection, if he had not been picked at random for a check by ICA officers," he said.

He also noted that the illegal importation of live animals carries the risk of bringing in deadly diseases, such as rabies.

"Although Singapore has been free from rabies since 1953... the authorities are careful not to be lulled into a false sense of security, especially since Singapore is surrounded by rabies-infected countries.

"Given that Singapore is an urbanised and densely populated city state, the consequences of an outbreak of rabies would be dire," he added.

The puppies were quarantined for 100 days at AVA's Sembawang Animal Quarantine Station. The authorities have worked with the Society for the Prevention of Cruelty to Animals (SPCA) to successfully rehome them.

Loh could have been fined $10,000 and jailed for 12 months for each of his two charges.

Related Stories
What kind of owner will do this? Dog left chained to wall and kept in rusty cage outside shop at Figaro Street
Poor dog chained up at Penjuru Rd factory daily for at least 3 years
More About:
smuggle
animal abuse