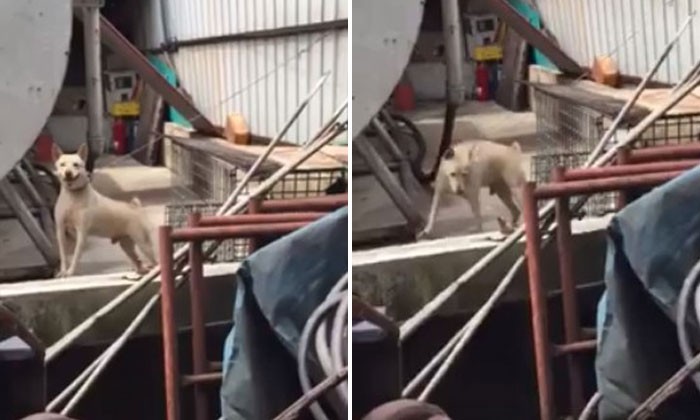 According to a caption on the video posted on Chained Dog Awareness in Singapore, a member of public has reported that the dog has been chained by its owner for three to four years.

"Diesel (we named him) is literally living with danger as he's tethered 24/7 near a diesel tank.

"He was observed to have no proper shelter with a chain that's hung up high!

"Two informants have spotted no water bowls in sight!

"This is the reason why we strongly believe that chained dogs are often neglected by their owners. These dogs are often out of sight and out of mind.

"They exist for one reason: to guard the owner's property and in this instance he may be placed next to this diesel tank to safeguard others from stealing his fuel.

"We are often at our wits end because there's just so much we can do for the chained dogs. At the end of the day, we can't be taking out every chained dog that's suffering.

"If a person wants to keep a pet or even treat man's best friend as a guard dog, for heaven's sake have the decency to treat them with care and love."

Related Stories
Pet grooming school owner charged with abandoning 18 dogs, keeping 28 without licence
Man in China gets beaten up for killing dog by dragging it behind his moving car
Toyota driver locks dog inside car to buy soap at The Verge -- then calls Stomper 'stupid' and 'ridiculous' after being confronted
More About:
animal abuse
heartbreaking