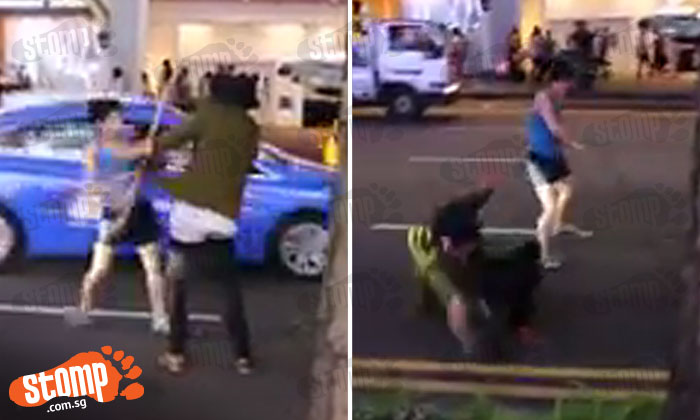 The driver has shared his side of the story with regard to the altercation involving him and a man that took place along Orchard Road on Dec 16 at around 10pm.

He mentioned that the victim was drunk and was harassing him before the incident took place.

"I was in the right most lane in heavy traffic, my lane was moving slowly forward. I then saw this man at the side of the road using a large bag to hit passing cars in my lane. When it came to "my turn" to get hit, I tried to outmaneuver this dimwit by moving to the left away from him. He still managed to hit the front windscreen of my car, and I hit the brakes because of the impact.

"After I stopped, he went completely nuts, hitting my driver's side window with his bag repeatedly. I sat in my car for a good long while, not knowing what to do. He continued hitting my windows, moving from the front to the back, then back to the front windows.

"I could not move the car without causing injury to him, either by running over his feet or hitting him with my side mirror. I noticed the impact were so hard that the glass started to flex and wobble with each hit, so I tried to put a stop to it by getting out of the car and shouting at him to ****ing stop his nonsense. He then hit me in the face with his large bag. He hit me so hard that my spectacles flew off my face. I pushed him to defend myself.

"I retrieved a stick from the boot of my car to fend him off. As the video shows, he continued advancing towards me so I hit him. After I finally incapacitated the attacker, I got on the ground and searched for my spectacles, after which I called the police to report that I was assaulted. While waiting for the police, the drunk man got up and started trying to attack me again. I ran around, monkeying my way around his pushes and drunken punches.

"I think he managed to hit me one time as my spectacles flew off my face again. I calmly picked up my spectacles and backed away from him. He still kept trying to attack me, until I deflected one of his pushes and threw him to the ground, and finally a member of the public came to calm the drunk man. (As you can see, he stopped physically attacking me but continued verbally attacking me).

"When I saw the police car drive by i flagged them down and told them the story. The police told me that his offence was "voluntarily causing hurt". I told them I did not want to pursue the matter, as I was not hurt.

"My car sustained some scratches and dents, some deep enough to expose the bare metal, but i felt that claiming damages would be more headache than what the repair was worth. When I went to the nearby police station to give a statement, a kind couple came in and handed this video in as evidence.

"Apparently they saw this drunk guy hitting cars earlier, and when they parked and walked out to the road, they saw this commotion and took a video to make a complaint about the drunk man to the Police."

Said a Police spokesperson with regard to the incident:

"On 16 December 2016 at 9.57pm, the Police were alerted to a case of voluntarily causing hurt along Orchard Road.

"A 34-year-old man is assisting with investigations."

Stompers Aexey, Bert and Edwin alerted Stomp to a video showing a shocking road rage incident showing a driver pushing a man before hitting him with a pole along Orchard Road on Dec 16 at around 10pm.

In the 16 second video, the driver clad in a blue singlet can be first seen shouting at the man and then giving him a hard push in the stomach by the side of the road.

The man who had a bigger build than that of his assailant fell onto the road subsequently.

The driver then went to the boot of his car and grabbed a long pole. At the same time, the man got up and started approaching the driver.

He tried to take the pole from the hand of his attacker, but failed.

The driver then hit the man twice with the weapon. The second hit landed directly on the victim's head and a loud 'thud' can be heard.

He then thew the pole back into the boot while the man lay motionless on the road.

Related Stories
Wah, 'gangsta' sia! Biker challengers driver to a fight on AYE
Another shocking attack caught on camera: Man gets whacked by pole as he tries to defend himself and plead for mercy
road rage
shocking
Orchard Rd
accident
fight