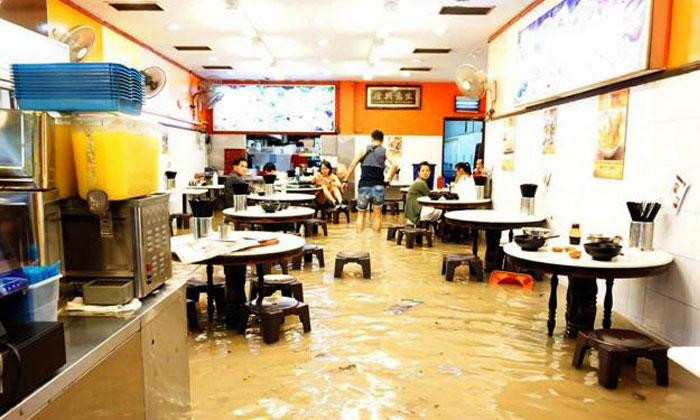 A choked drain in a nearby construction site for the upcoming Upper Thomson MRT station led to the flash floods that put a dampener on the festive mood at several eateries on Christmas Eve.

This was uncovered during investigations by national water agency PUB.

To fix the problem, the Land Transport Authority will get the worksite's contractor to further improve the flow of water in the temporary diversion drain, which acts as a conduit for rain water while drainage upgrading works are ongoing.

"As part of works to construct Upper Thomson MRT Station, PUB is also working with LTA to upgrade the drain along Upper Thomson Road to enhance flood protection for the area," the authorities told The Straits Times.

PUB has also reminded the construction industry to conduct checks on the public drains in the vicinity of their respective construction sites in preparation for the monsoon season.

The flash flood incident took place last Saturday, at a row of shops between Jalan Keli and Jalan Todak near Thomson Plaza.

About eight businesses along Upper Thomson Road were affected by the flash floods, and tenants said they suffered thousands of dollars in losses.

The Meteorological Services Singapore said average rainfall over Singapore that day was 35.5mm, with the highest daily rainfall that day recorded at Tai Seng (86.0mm).

Mr Jamal Mohamed, 50, a cashier at The Roti Prata House, one of the affected eateries, estimated his loss at about $30,000, including the hours that the shop had to stay closed while workers cleaned up.

After it closed at about 5.30pm on Saturday, workers managed to keep regular business hours only on Monday.

"We salvaged what we could, but flour, masala, rice and eggs were wasted," said the employee, who has been working at the food joint for nine years.

The nearby construction for the Upper Thomson station, is part of a 22-station Thomson Line, started in 2014. The station will be built underneath a stretch of Upper Thomson Road between Thomson Plaza and the Church of the Holy Spirit.

The Christmas Eve flash flood was just one of 10 days when flash floods occurred as of Wednesday. This is up from the six that took place during the El Nino year last year, but down from the 17 flash flood days recorded in 2014.

PUB has undertaken efforts to reduce flood-prone areas in Singapore, including the widening and deepening of drains and canals, the construction of new drains and the upgrading of ageing ones.

Such efforts have helped reduce the flood-prone areas in Singapore to 30.5ha to date - down from the 35ha last year.