Crowds, chaos and conflict: It's seriously a nightmare trying to board Bus 856 in Woodlands 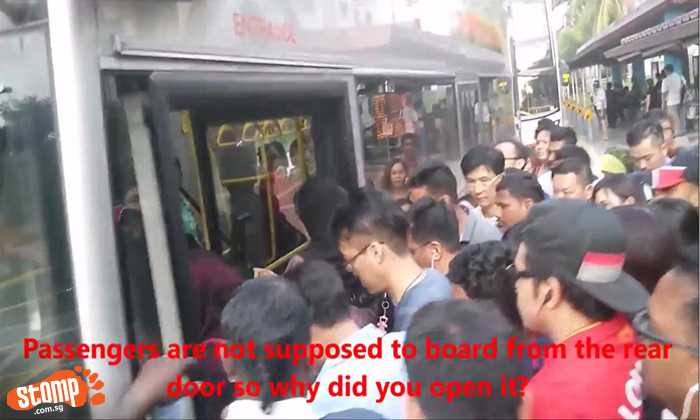 Trying to board bus service 856, which runs between Woodlands Interchange and Yishun Interchange, is more than just a daily hassle: It's a complete nightmare.

A video made and contributed by Stomper Sergio documents the pains that commuters have to go through just to board the bus.

Bus service 856 passes Woodlands Train Checkpoint, which is also known as the Woodlands Causeway. Hence, it serves many Malaysians who are on their way to work.

For these workers, Bus 856 is their 'best' option as their other alternatives, Bus 950 is always packed and does not stop as frequently while TS1 is a private-operated service that charges a much higher fare.

However, trying to board Bus 856 is just as equally frustrating for Malaysians and Singaporeans alike.

Stomper Sergio's video, filmed at the bus stop opposite Marsiling MRT Station, shows a large group of commuters waiting to board a bus.

Some of them appear to lash out at the driver for apparently opening the bus's rear doors instead of the front ones, thus unfairly allowing others to cut the queue and board the bus.

Having to wait for multiple Buses 856 -- that are packed to the brim with commuters -- to pass before being able to board one with enough space also seems to be a common gripe.

Watch the video below for more info.

Related Stories
Men shout at each other in the middle of Toa Payoh road -- over a supermarket trolley
'Stupid Singaporean!' Man and woman get into heated argument on bus
LTA apologises after officer filmed in altercation with motorist at Yio Chu Kang MRT station
More About:
Bus
queue
dispute
long wait for crowded bus 856