Charged: Suspected thief who was chased by maids and nabbed by heroic passer-by at East Coast 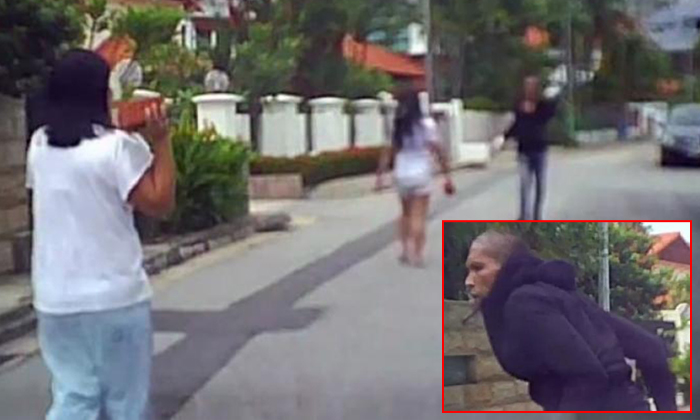 The man who allegedly broke into a home in Frankel Estate and stole money has been arrested and charged.

It was earlier reported that the man had tried to flee with a handbag containing 820 British pounds on Oct 27, at around 11.30am.

Two maids were seen chasing him on foot, with red bricks in their hands.

A video showed the hoodie-clad man dropping some of the stolen cash on the road during his escape attempt, which he tried bending down to retrieve, only to trip and fall.

When one maid caught up with him, he turned "very, very violent" and tried to hit her.

Fortunately, 33-year-old finance manager Mr Eugene Goh had been driving by when he came across the scene.

He had been on his way to have lunch at East Coast Park with his family of five when one of the maids waved for him to stop and asked for help.

She told him, "He has taken the money inside the house. Help me sir, help me please! Our employer is not there (at home)."

Mr Goh managed to stop the man from fleeing and the suspect was eventually handed over to the police when they arrived on the scene.

The same evening, the police said in a news release that they had arrested a 46-year-old man for suspected involvement in housebreaking and theft at Frankel Street, with assistance from the public.

According to The Straits Times, the suspect was charged on Oct 28 with housebreaking and theft, and may be fined and imprisoned for up to 10 years.

Mr Goh has been lauded for the part he played in the incident.

Commander of Bedok Division, Assistant Commissioner of Police Alvin Moh said: "This case illustrates the close partnership between the police and the community in fighting crime. Mr Goh had played an important role in the arrest and his selflessness and public-spiritedness are commendable."