'Cardboard uncle' knocked down by taxi: 'Where is my trolley? I have 2 packets of biscuits inside' 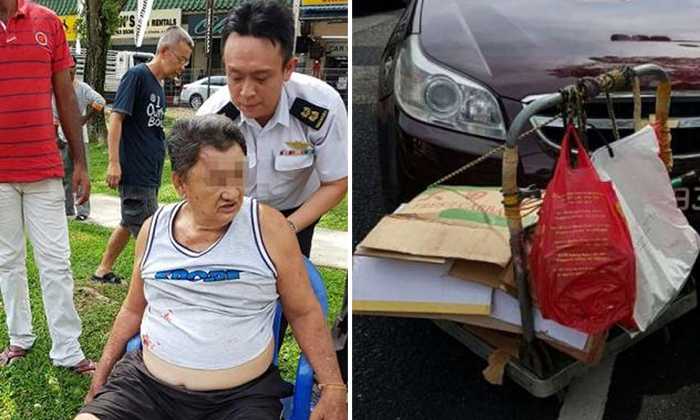 The "cardboard uncle" was lying on the road, bleeding, after he was hit by a taxi.

The accident happened at the junction of Yishun Avenue 3 and Sembawang Road at about 2.30pm on Thursday.

The elderly man, later identified as Mr Wong Kum Chew, 63, was crossing the road at the junction with his trolley when the taxi, which was making a left turn, hit him, witnesses told Lianhe Wanbao.

One of the passers-by who rushed to help him, Ms Irene Lim, 36, a marketing director, told the Chinese evening daily that she saw the accident and rushed over.

She found Mr Wong lying on the road near his trolley loaded with cardboard, with cuts, grazes and blood all over his body.

"It was heartbreaking seeing him like that," she said. An eyewitness told Wanbao that the impact of the crash knocked Mr Wong to the ground and sent him tumbling for about 2m.

"Thankfully there were many others who came together to take care of him. Hopefully, more or less, that would have lessened his pain," she said.

A Singapore Armed Forces officer, Lieutenant Colonel (Dr) Timothy Teoh, told Wanbao: "I was worried that (Mr Wong) had suffered a fracture. So I checked his injuries, his back and body to make sure nothing was fractured."

He also helped Mr Wong to the side of the road.

Staff from a McDonald's outlet nearby also brought water to clean his wounds, reported Wanbao.

A police spokesman told The New Paper they were alerted to the accident at about 2.40pm.

Mr Wong later told Wanbao that he would collect cardboard pieces near his home every day.

The elderly man - who lives with his wife and son - would do so to help out his son, who is the family's sole breadwinner and earns about $1,000 a month.

"I take the opportunity, while I'm still fit, to walk about and collect cardboard to sell. It's not just helping my son, but I also stay healthy," he said.

Ms Lim, who remained by Mr Wong's side until the ambulance had left the scene, told TNP that she and her husband later pushed Mr Wong's trolley back to his home.

They took about 30 minutes.

"Even my husband, who is of a big build, was drenched in sweat by the time we were done," she said.

"The elderly Mr Wong has to do this every day. It must not be easy and we really respect him for his perseverance."

TNP understands no one has been arrested so far. Police are investigating the accident.